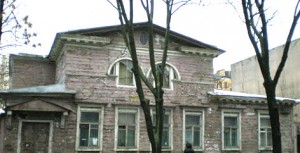 On October 16, 1917, an enlarged session of the Central Committee of the Bolshevist Party was held under V. I. Lenin’s guidance in this house, representatives from local Party and Trade Union organizations participating in it. The session confirmed the decision of the Central Committee adopted on the 10th of October concerning an armed uprising; a Military Revolutionary Centre to direct the uprising was established.