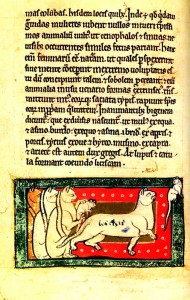 Cat /catus, musio/ 10X5 cm
Pseudo-Hugh /III.24/ and the bestiaries which are close to Isidore’s version /XII.2.38/ derive the word “musio” from “mus” /mouse/, and “catus” from “captare” /capture/ because of the cat’s abilities to catch its prey; or from the Greek “catus” /acute/ implying the cat’s acute eyesight and his ability to see in darkness.
Painters, depicting cats in the manuscripts of the twelfth and thirteenth centuries, introduce a lot of new details observed in life. The amusing, lively scene of cats catching mice often appeared in folk engravings and cloth designs of the period from the fifteenth to the eigteenth centuries.