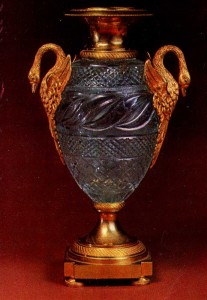 The History Museum in Moscow takes pride in its collections of decorative and applied art, including an extensive collection of Russian art glass which reflects the entire history of glass-making in this country, beginning with the seventeenth century.
Moscow and the districts surrounding it were among the oldest centres of Russian glass industry, active since the seventeenth century. The Izmailovo (known also as Izmailov-sky) Glasshouse, founded in 1669, enjoyed particularly wide renown. One of its prominent masters was Indrik Lerin, who produced a whole series of fancy goblets. Due to their faultless modelling and ingenious treatment of material these goblets may be qualified as the Russian version cf Venetian glass, which influenced to a considerable extent the artistic idiom of Russian glass-making.
The eighteenth century saw the emergence of a large number of new glass factories. Until the last quarter of the century, the main technique of decorating glass articles was engraving. Baroque goblets predominated within a rather stable range of shapes. Although they did not differ much in form, these goblets presented an infinite variety of engraved ornamentation. Their decorative motifs have preserved for us many aspects of Russian life of those times.
The St. Petersburg glass factories catered to the demands of the elite. Several privately-owned glasshouses which existed at different times on the outskirts of the city were eventually, towards the end of the century, amalgamated into the Imperial Glass Factory. As its output was mainly intended for the imperial court, the motifs engraved on goblets and wine glasses included extolment of military victories, ball scenes, ceremonial processions and amusements.
Notable among the provincial centres of glass-making in the eighteenth century were the factories of the Mal-tsov family, who started with a modest enterprise in the Mozhaisk district in the vicinity of Moscow, and then expanded their business as far as the Vladimir and Orel provinces. They founded, among others, the Gus-Khrustalny and Diatkovo glassworks, which have retained to this day their importance as the country’s major glass-making centres. In addition to utility glassware, designed for mass distribution, they produced custom-made engraved drinking-cups whose decor, while conforming basically to the style of the Baroque and Rococo, also contained features of popular art. Rocaille motifs and subjects were as a rule modified in keeping with folk tradition, faithfully adhered to throughout the century by the Maltsov craftsmen.
The Imperial Glass Factory near St. Petersburg and the Bakhmetyev Factory near Penza, on the other hand, responded more readily to the demands of the time. The last third of the eighteenth century witnessed an upsurge of the neo¬classical style which radically transformed the shape and decor of glass articles put out by the Imperial Glass Factory. A new technique of coloured glass production was devised by Lomonosov. The methods of making blue, violet, emerald-green, frosted and turquoise glass, as well as gold ruby glass, were improved. The glass articles produced were notable for their austere elegance and the infinite variations of gilded ornamentation composed of bands, medallions and garlands of laurel leaves.
Russian glass in the nineteenth century was extremely varied and rich in style and technology. Lead glass began to be produced in the early 1800s and became the basic material of the period. The cold shimmer of its facets combined with a characteristic, somewhat heavy silhouette expressed the very essence of the Empire style which determined the stylistic idiom of Russiant art glass for almost half a century. The Empire style also served as a foundation with which, in the second quarter of the nineteenth century, elements of the Rococo and reminiscences of the Gothic style came to merge.
During the second half of the century, a tendency towards retrospection evolved in glass production, a tendency arising from the revival of interest in many European and Oriental styles of the past. Especially frequent was recourse to the “Russian style”, which increasingly assimilated features of folk art.
The artistic potential of glass developed apace with improving technology. New hues enriched the palette of coloured glass — uranium glass, copper ruby, coloured smalt, and so on. The technique of cased glass, with two layers of glass of different colours fused together, enjoyed great popularity; lustre and different kinds of enamel were often employed. In addition to free blowing, hand-cutting and hand-engraving, chemical methods, such as etching and mat engraving, were introduced. The latter methods came into vogue during the Art Nouveau period, and imparted a specific picturesque effect to multi-layered glass articles made in the Galle technique. Etching was especially favoured at the Gus-Khrustalny Glassworks, while at the Imperial Glass Factory in St. Petersburg the effect of pictur-esqueness was attained by carving.