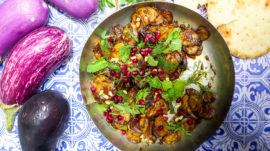 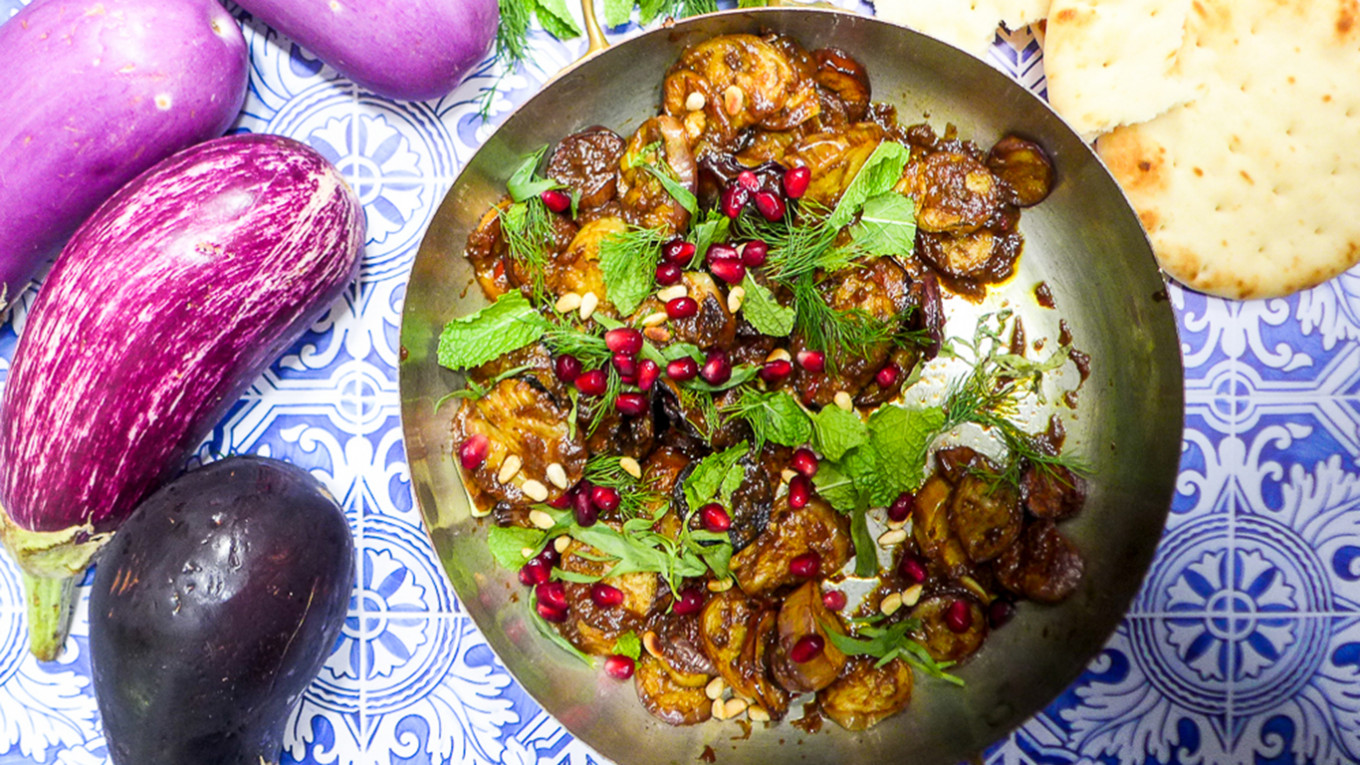 One of my superpowers is the ability to come up with names for dishes. I play with puns, literary allusions, alliteration, and assonance. But in the case of this particular eggplant recipe, I cannot, for the life of me, come up with anything better than the name by which it is known in my immediate circle: “That Eggplant Thing.”

“Did you make That Eggplant Thing?” my daughter asks hopefully as she dumps a mountain of college dorm laundry in the mudroom at the beginning of spring break.

“Where’s That Eggplant Thing?” my husband shouts up to me as he trawls the refrigerator for a snack.

And whenever I ask someone, “What can I bring to your party?” the reply invariably is, “Could you manage That Eggplant Thing?”

It never lasts long enough to go bad, That Eggplant Thing, because it is so versatile. I’d define it as a “spreadable:” that marvelous category of food such as hummus or dips that takes you effortlessly from mid-afternoon to mid-evening so adroitly that your guests may never notice you haven’t served dinner. But on the (rare) chance there is some left over, I can parlay it into almost every meal: over rice, buckwheat, and roast potatoes as a main dish, slathered into sandwiches, swirled on top of hummus, baba ganoush, and labneh for a snack, and spooned over scrambled eggs for breakfast. When no one’s looking, I just eat it plain, directly from the jar. Delicious.

That Eggplant Thing began life with Alison Roman’s attempt to replicate her neighborhood falafel joint’s Eggplant Thing, in her debut cookbook, “Dining In.” In Alison’s version, the key ingredients were Harissa and cumin. I was dying to try it but could not run a jar of Harissa to ground in Moscow. So, I did what I have done for two decades of living in Russia: I improvised with local ingredients. Harissa may be hard to find in The Big Potato, but a jar of its Georgian cousin, Adjika is always to hand. This marvelous Caucasian condiment consists of the same ingredients as Harissa (garlic, spicy chili peppers, salt, and vinegar) but can also include sweet red peppers, Georgian spices, herbs, tomato paste, and even walnuts. This makes Adjika a bit sweeter and more pungent than Harissa, with less heat and a bit less bite.

Sometimes I am wary of my culinary improvisations, but not in this instance. Adjika and eggplant are a high-altitude version of bacon and eggs. To them, I confidentially added other Georgian ingredients that play equally nicely with eggplant: pomegranate, Khmeli-Suneli spice mix (a traditional Georgian blend of basil, dill, parsley, fenugreek, coriander, marigold, bay leaf, summer savory, and celery seed) tomato paste, and fresh chopped herbs.

Eggplant season is upon us — my farmer’s market is practically paying me to take them away, so this is a great time to make That Eggplant Thing. For best results, choose smaller, longer eggplants rather than the large globe ones; discs provide more surface area than cubes. I always advocate salting eggplant before frying it to get rid of the bitter juice and to soften it up before frying. Because fry you must with That Eggplant Thing, and in a shocking amount of olive oil. But that’s what makes everyone come back for more. Trust me.

My favorite way to consume That Eggplant Thing is with grilled flatbreads and labneh, a yogurt cheese that is very easy to make. It’s cool, creamy smoothness contrasts delectably with That Eggplant Thing’s slightly crunchy, hot, piquancy. Add some fresh pomegranate seeds for a pop of color and refreshing zing, and soon you too will be fielding that perennial question, “got any more of That Eggplant Thing?”

That Eggplant Thing with Labneh

Some Other Ways to Enjoy That Eggplant Thing

*Adapted from Alison Roman’s “Fried Eggplant with Harissa and Dill” from “Dining In.”