Culture | Did Disney Pixar Get Day of the Dead Celebrations Right in Its New Film ‘Coco’?
RssMail

Did Disney Pixar Get Day of the Dead Celebrations Right in Its New Film ‘Coco’? 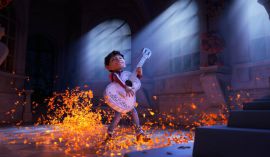 Fall, when temperatures dip and trees shed their leaves, is my favorite time of the year, not only because of the blustery weather but also because it marks the season of holidays and my family’s traditions. In my home, these include the viewing of holiday-themed television programs and theater visits to see blockbuster films. This year, Disney Pixar’s Coco, the new animated film that celebrates the Mexican tradition known as Día de Muertos, is sure to be a family favorite.

Día de Muertos has its roots in a pre-Hispanic commemoration of deceased loved ones that is practiced by some Latin American indigenous populations. The film draws its cultural inspiration from several Mexican variations of this tradition, which also happen to be those most commonly found in the United States.

Coco is the story of Miguel, a young boy eager to follow his passion for music in a family that—puzzlingly—has banned music for several generations. The title refers to Miguel’s great-grandmother Mamá Coco, whose father is key to the anti-music mystery. This tale unfolds in an unspecified Mexican town on the eve of El Día de los Muertos (the Day of the Dead) as the entire community is preparing to honor their departed loved ones. Miguel finds himself transported to the place of the dead just as the dead are making their way to the land of the living to be with their family and friends. Adventures ensue as this living boy tries to navigate the land of the dead, a visually vibrant and whimsically reimagined illustration of this traditional realm.

Theatergoers will find Coco to be a powerfully communicated story about the importance of family, community, a sense of belonging, tradition and remembrance.

So here is the big question: did Disney Pixar get it right? My first response is to ask another question, “Right by whose standard?” Are we talking about the indigenous traditions of celebrating ancestors as they were practiced before the arrival of Europeans? If so, which of the many distinct variations and of which communities? What about the Day of the Dead that merged with Roman Catholic practices after the arrival of Europeans in the Americas? What about the Mexican national celebration? What about the Day of the Dead tradition introduced to the U.S. by Mexican Americans during the Chicano Movement of the 1960s and 1970s? Or maybe the Day of the Dead traditions that are practiced by recently immigrated Indigenous Latino populations in the U.S.?

Within Mexico there are many regional and community-specific interpretations of the  tradition. The representation in Coco is a composite, but the individual elements would be recognizable to those familiar with the tradition. The film is rich in Day of the Dead imagery such as decorated cemeteries and ofrendas (offerings)—temporary memorial spaces devoted to deceased family and friends. These spaces are filled with favorite foods and beverages, images of loved ones, candles and an abundance of cempasúchil (marigolds). Even the bridge between the place of the living and the place of the dead is made of cempasúchil petals.

Some of the movie’s characters, in both human and skeletal form, come straight out of central casting. You find celebrities like Frida Kahlo, Lucha Libre wrestlers and mariachi musicians in traditional regalia, as well as an assortment of relatives whom we can all identify. Some of the characters are neither living humans nor skeleton beings, but they are certainly well-known to most Mexicans. A Xoloitzcuintli dog named Dante accompanies Miguel on his adventures. This hairless, ancient breed is considered to be the national dog of Mexico. Through the course of the film, Dante transforms into a living alebrije—a folk art form of fanciful, elaborately painted creature sculptures. In the movie, alebrijes are companions to the deceased.

Even the depicted spaces are recognizable to viewers. Miguel’s town evokes a tranquil colonial village complete with cobblestone streets, arched colonnades, wrought iron and clay-tiled roofs. The place of the dead, filled with all sorts of activity and nightlife, is an expansive, colorfully lit urban space built on ancient pyramids. It could have been inspired by the cityscapes of Mexico, D.F. and Guanajuato City.

Interestingly, travel in the film from the land of the dead to the land of the living requires going through a type of afterlife immigration process. The dead must present themselves to an officer who conducts a computer search for their image. Your photo must be found on an ofrenda; if it isn’t there, it means you are no longer remembered by your family or friends, and you will not be allowed to walk across the cempasúchil bridge to the land of the living. Looks like immigration is tough even in the afterlife.

Culture is a set of tools created and used by humans to meet life’s challenges. A fundamental truth about culture is that it is complicated. In order for culture to serve its purpose, it must be able to adapt to the needs of the user. Individual elements of a tradition can be discarded and new elements can be incorporated. New materials can be added if they meet the aesthetic and practical needs of the expression. Rituals from other communities are accepted if they are meaningful for community. Some aspects of culture can take many years to evolve and yet others can change very quickly. When a cultural expression no longer serves a function, it can simply cease to exist.

We often get bogged down in the business of anointing cultural expressions as “authentic.”  This implies that there is a right and wrong way of performing our culture, or that of others. Although we may be able to determine if cultural practices are “genuine” or if representations are presented in a respectful manner, in the case of Day of the Dead, making those determinations is especially complicated. The traditions have been exposed to so many outside audiences and adapted by non-traditional practitioners. Even if you are inclined to study the tradition in an effort to present it respectfully, it is difficult to know whose authority to accept. There are countless competing voices claiming authenticity and authoritative knowledge about the tradition.

Day of the Dead is relatively new in the U.S., but it has been incorporated into our holiday cycle with gusto. We travel to Mexican destinations promoted by government tourism entities to observe or even participate in celebrations. Hotels and other tourism venues create Day of the Dead activities for national and international guests.

The internet has made Day of the Dead available to us on an unprecedented scale. Spend some time on Pinterest and you can learn how to throw a Day of the Dead party, do your skeleton make-up, plan your Day of the Dead–themed wedding, construct ofrendas or design your own sugar skull. Throughout the U.S. you can find Day of the Dead pub crawls, parades, museum programs, masquerade galas and marathons.

It is quite clear that in the case of Day of the Dead, the cultural appropriation train has left the station and is moving along at full speed. To be sure, all sorts of aberrations will continue to appear. Thankfully, the Mexican indigenous festivity of Day of the Dead was inscribed to the Unesco Representative List of the Intangible Cultural Heritage of Humanity. This recognition, we hope, will help in the preservation of the tradition as it is practiced in its original communities.

So what is a folklorist to do when asked if Disney Pixar got it right? Rather than assuming that as a scholar I have a moral or intellectual right to make a single-handed determination, I would pose the question to Mexican traditional practitioners. They, after all, are the owners and ultimate authorities of that tradition.

By many accounts the film is enjoying tremendous acceptance in Mexico, and it is generating an abundance of positive internet chatter. For me, a heartwarming image that came up in an online search is perhaps a good measure of the film’s success. It depicts a gathering in Oaxaca of abuelitos (grandparents) viewing the film with smiling approval. Oaxaca is a place in Mexico where the Day of the Dead tradition is particularly rich.