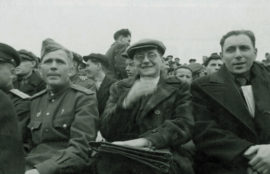 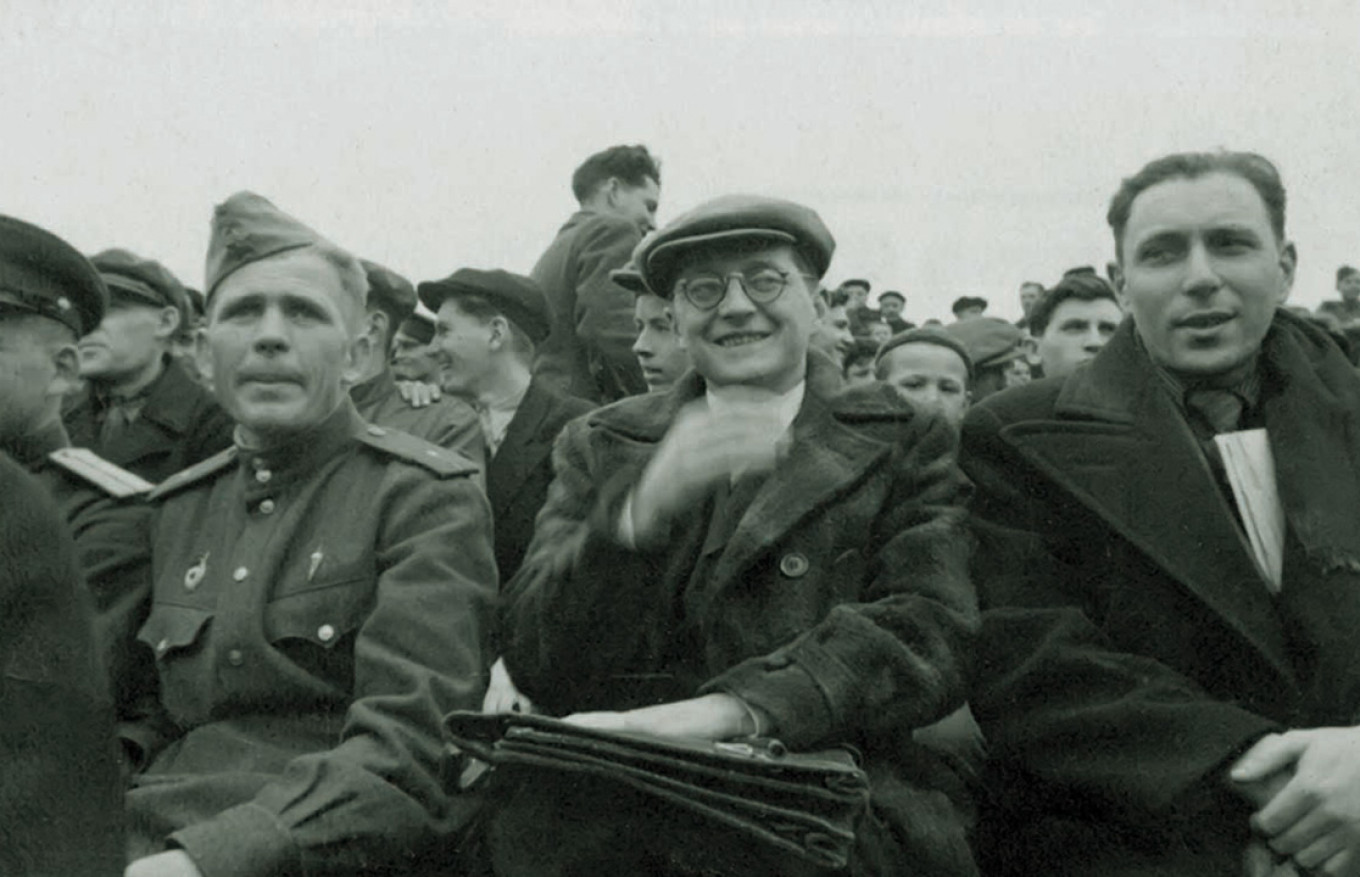 Dmitri Shostakovich was one of the 20th century’s most celebrated and prolific composers, whose symphonies, concerti, string quartets and dozens of other works became the musical backdrop for several generations of Soviet citizens. A slim man in thick glasses, Shostakovich was fastidious, diffident, and orderly, the very image of an intellectual composer.

But Dmitri Shostakovich was also one of the Soviet Union’s greatest football fans. Not only did he attend games wherever he was, he kept meticulous records of the championship teams’ statistics, became qualified as an referee, and even wrote articles on the game and matches for sports newspapers. The only sign of his decidedly non-sports status was his byline: “D. Shostakovich. Stalin Prize Winner.”

For 14 years Dmitri Bagrinsky, a musician, musicologist and professor at the St. Petersburg Conservatory, gathered material on Shostakovich and football. After meeting with Shostakovich’s widow, he was able to expand his research to the private family archives. The resulting book came out in Russian in the summer of 2018, and an English version has just been released this summer. Translated into English by Alison Yermolova, it was designed by Yulia Nogarova, who illustrated the deep red cover with Varvara Stepanova’s first sketch of a uniform for Soviet football players. Inside the page numbers mimic the numbers on scoreboards, and tiny drawings of football players dribble and pass the ball at the bottom of every page.

In an interview to The Moscow Times, Bagrinsky said that he had originally conceived the book as something like a series of blog posts that present everything known about Dmitri Shostakovich and football. It is a compendium of information with more visual material than text: photographs; music scores; theater announcements; letters; notes to his family (“Gone to the game… there’s a ticket on the table if you want to come”); telegrams about matches (“Torpedo beat Elektrik three-zero”); newspaper clippings; and statistical records kept by the composer — many of which are published for the first time.

There are sections on Shostakovich’s football-themed music, the first a football ballet called “The Golden Age” that he wrote at the age of 22 in 1929, after finishing his First Symphony.  It premiered in 1930 and then was suddenly banned in 1931, only to be revived in very different forms in 1982 and 2006.

Later, in 1944, he was recruited to write music for the NKVD (precursor to KGB) musical ensemble, an invitation Shostakovich, who had been accused of composing a “muddle instead of music,” was unable to refuse. His musical contribution was described by a member of the ensemble, a young graduate of the Vakhtangov Theater Academy named Yuri Lyubimov — who would become one of the country’s most famous, and most non-traditional, theater directors at the Taganka Theater. In his memoirs, Lyubimov wrote, “Once our boss, a secret police officer, expressed a wish for a dance depicting football. Suddenly Shostakovich piped up, ‘May I compose the music for Football, if you have nothing against it?’” The boss didn’t, and Shostakovich wrote the piece.

Other sections cover his articles in sports newspapers, his unusual record-keeping for the championship in a leather notebook he called his Großbuch, his time at the games and his  friendships with players. Shostakovich, Bagrinsky said, “was a philosopher, a deep thinker, who had created such significant, monumental works of music, but it turned out he was good friends with a professional football player. How amazing that he could be friends with such a totally different kind of person.”

Football wasn’t Shostakovich’s only sport. He went to boxing matches, played tennis and billiards, cards, poker, and chess. Bagrinsky says, “He was a gambler at heart. He liked to play cards, poker – there was a famous case in 1930 he even lost his concert piano.”

The piano was lost in a game of poker played in the director’s office of the Leningrad Music Hall in 1931. The game went on all day and all night, and Shostakovich was on a losing streak, culminating with losing his bet of his redwood office piano (although it was bought back by a friend). On another occasion in Odessa he lost 1,000 rubles, an astronomical sum at the time. “I have never had such phenomenal bad luck in my whole life. I have no money again, and because of this decided to go home,” he wrote to one of his friends.

“On the one hand,” Braginsky said, “he was a gambler and risk-taker, on the other he was an incredibly orderly thinker. He often used polyphony in his music, that is, severeal voices singing different tunes. Polyphony is a very complicated musical technique… and to compose it, it requires an incredible sense of order. He had such absolute mental discipline and an ordered mind, and yet there was a gambler inside him.”

Dmitry Shostakovich’s son, the conductor and musician Maxim Shostakovich, explained the role football played in his father’s life. “In difficult years, football became a great source of comfort. Yes, it was a true saving grace for him. It was football that helped him live through the persecution at the end of the 1940s, when certain forces tried to destroy him; he was fired from the conservatoire and deprived of his professorial status […] By switching his attention to football, father distracted himself from the nightmares of the second wave of ideological terror. Football helped him to calm down, cope with stress and regain his equilibrium.”

During the writing of the book, Bagrinsky learned of a letter about football written by Shostakovich in 1939 held in a private collection. There was no envelope, and the addressee had never been identified. Bagrinsky determined that it had been written to Petr (aka Peka) Dementyev, one of the country’s top players. In the chapter entitled “Peka Dementyev and Football Friends,” Bagrinsky describes Shostakovich’s personal friendships with players.

“Dear Petya, I received your telegram with the sad news about the loss to Tbilisi Dinamo. So far we are having no sporting luck. But, as an old saying goes, he who laughs lasts, laughs longest. And I am sure that this season we will be having a good long laugh, although, I must admit that it has not got off to a very good start. Five goals have been scored against us, but we have not scored one(!) against our opponents. The fans are already sounding the warning. I am the only one staying calm.

“Give my greetings to your teammates and wish them luck, victory and a fighting spirit.

“We are all waiting anxiously for your return home. “Best regards. Shostakovich.”

Judging from this letter, Shostakovich was on friendly terms with Dementyev (“I received your telegram…”), which, incidentally, applied to many other Leningrad football players. For example, Dmitri Dmitriyevich was well acquainted with Valentin Fedorov, a player for the Dinamo and Zenit Leningrad teams, which is shown from the composer’s letter to Vissarion Shebalin: “Dear Ronya, I am writing to you with a special request. I will be coming to Moscow on 24 September, and on the 25th I’ll be leaving Moscow to go to Sverdlovsk, where I will be playing my piano concerto.

“On the 24th, I’ll be going to the football match between Moscow and Leningrad Dinamo.

“My friend, Valentin Fedorov, leader of Leningrad’s Dinamo, has kindly agreed to get two tickets for me. I asked him to give these tickets to you. So when Valentin Fedorov calls you around the 20th of this month, don’t be surprised, and tell him your address, so he can deliver the tickets. And if you want to go to this match yourself, tell him when he calls and he will be happy to get tickets for you as well. “Valentin Fedorov is a supremely wonderful person and one of the best left halfbacks in the Soviet Union. So don’t say anything to offend him when you meet him, since I value my good relations with him.”

The reminiscences of Alisa Shebalina, Vissarion Shebalin’s wife, complement this letter: “Mitya [Shostakovich] always stopped in Moscow on his way home from concerts in the south — there  were  always  things he needed to take  care of. He would rush to Moscow for every match of his favourite teams and Ronya [Shebalin], who was indifferent to football, always had to get tickets in advance for him and even invite famous football players to visit us, whom Mitya was very shy of, like a kid.”

Shostakovich idolised his favourite players, his admiration sometimes bordering on youthful rapture. Petersburg football fan Vladimir Perchenko related: “Once at the end of the 1940s, a football fan I knew, who was first secretary of the Dzerzhinsky District Party Council of Leningrad in those years, ran into Shostakovich, who had just returned from Moscow, in the corridor of the city executive committee. Dmitri Dmitriyevich could not retain his joy: ‘I was introduced to Paichadze in Moscow! Paichadze shook my hand!’ Boris Paichadze was the legendary forward for Tbilisi Dinamo. The main stadium in Tbilisi, which in the 1930s was called the Comrade Beria Stadium, is now named after Paichadze.”

According to the recollections of Isaak Glikman, Shostakovich was “interested in what the players were like outside the stadium. He wanted to know how they behaved in everyday life, in daily affairs, when they were not out on the playing field. Some football players knew about the famous composer’s interest in them and were very flattered.

“To satisfy his curiosity, one summer, while Nina Vasilyevna was away, Shostakovich invited the players of the Zenit team for lunch, and I was invited to this gathering too. It went very well, and Dmitri Dmitriyevich worried for nothing. He proved to be a generous, considerate, and attentive host, but without overdoing it. He always kept himself in check with his wonderful sense of moderation. The guests behaved discreetly and quietly, perhaps even rather timidly at first, in this unfamiliar home. It was difficult to find things to talk about, but in the end the ice was broken and an unconstrained atmosphere reigned at the table.

“When we moved into the office after lunch, one of the football players, who could play the guitar, asked Shostakovich to play some of his music on the piano, to which the gracious host happily consented. When the guests left, Dmitri Dmitriyevich sat down on the couch, obviously pleased with himself, and said with a slightly enigmatic smile, ‘So you and I have made the acquaintance of the heroes of the football dramas we have only watched so far from a great distance, from the heights of the stadium stands.’”

For ease of reading, footnotes have been removed.