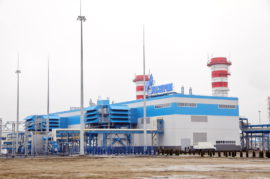 A commissioning ceremony for Power Unit No. 1 of the Grozny Thermal Power Plant (TPP) took place today in Grozny.

With Power Unit No. 1 up and running, the first of two stages in the construction of the Grozny TPP is now completed. The newly operational facility, which has a capacity of some 180 MW, consists of a gas turbine unit based on a gas turbine and a generator produced by Siemens. The construction process made wide use of Russian technological systems and equipment, including automation and relay protection systems, switchgear, gas treatment equipment, dry fan cooling towers, and exhaust stacks with an emission monitoring system. The facility uses natural gas, the cleanest of fossil fuels, as its primary fuel.

During the second stage, Power Unit No. 2, which will have similar performance characteristics and equipment, will be built and brought into operation. The aggregate installed capacity of the TPP will thus reach its design value of approximately 360 MW.

“Up until now, there have been no high-performance power plants in the region. Power Unit No. 1 of the Grozny TPP will meet a considerable share of the Chechen Republic’s electricity needs. As soon as the second power unit comes onstream next year, the TPP’s production rate will double and reach approximately 360 MW. As a result, the power plant will be able to produce more electricity than the amount consumed in the region throughout 2017.

The new, state-of-the-art power plant will contribute to the regional economy and improve the stability of southern Russia’s energy system. By completing the construction of the Grozny TPP, the Gazprom Group will bring to a close its ambitious program for the creation of new capacities under its capacity supply agreements,” said Valery Golubev.

The Gazprom Group is implementing the Grozny TPP construction project in the framework of the capacity supply agreement system, as stipulated in the Russian Government’s Order No. 238-r dated February 16, 2015, and Order No. 2636-r dated November 28, 2017.

Gazprom Energoholding, a wholly-owned subsidiary of Gazprom, is a special-purpose company that manages the companies of the Gazprom Group in the power generation sector. Its main production assets are Mosenergo, TGC-1, OGK-2, and MOEK.

Gazprom Energoholding is the leader in heat and power generation among domestic heat producing companies. Its plants generate about one-sixth of all electric power in Russia’s Unified Energy System.

The operator for the Grozny TPP is OGK-2.