Culture | From Egyptian Cats to Crime Scenes, Here’s a Preview of the Smithsonian’s Upcoming Shows
RssMail

From Egyptian Cats to Crime Scenes, Here’s a Preview of the Smithsonian’s Upcoming Shows 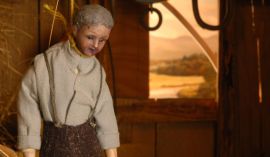 Whether your passion lies in Asian or American artifacts; photography or philately; crime scenes, cats or commanders in chief; postmodernism, printmaking or Persian history, the exhibitions opening this fall at the Smithsonian museums across Washington, D.C. and in New York City are sure to contain something up your alley.

High on the list of Washington D.C. happenings this fall will be the October 14 reopening of  the Freer|Sackler Museum, which comes on the heels of the Freer Gallery’s two-year renovation. In honor of the revitalization of the gallery and the curatorial rethinking of its exhibition space, the reopening will be accompanied by a weekend of celebration. “IlluminAsia: A Festival of Asian Art, Food, and Cultures” will boast an Asian food market, art-making workshops, performances and a spectacular, must-see video projection presented on the museum’s Mall-side entrance.

With the reopening, fans of felines will be treated to a large collection of cat exotica from ancient Egypt in the new exhibition “Divine Felines: Cats of Ancient Egypt,” with the oldest specimens dating back some 4,000 years. From statues, grave markers and sphinxes to a literal cat mummy, the 70-odd objects will convey the spiritual and cultural significance of Egyptian cats in a visually vivid way. The Sackler is even throwing a bone to dog people—several jackal- and otherwise canid-themed artworks will be getting their own little nook within the larger display.

The Sackler will also offer a look at a formidable collection of Bronze Age bells from China, and will allow visitors to synthesize their own music from the authentic recorded sounds of the instruments on handy touchscreen computers. “Encountering the Buddha: Art and Practice Across Asia” offers a pan-Asian perspective on depictions of the religious icon, and in “Feast Your Eyes: A Taste for Luxury in Ancient Iran,” the lives of millennia-old nobles will be illuminated through the unlikely window of their lavish gold and silver tableware.

In New York City, the Cooper Hewitt Design Museum, meanwhile, will be homing in on the rich cultural legacy of Japan. In “Passion for the Exotic: Japonism,” late 19th-century pottery, furniture and other handcrafted items inspired by Japanese traditions, but made in the West, will testify to the island nation’s global aesthetic impact.

“Passion for the Exotic” well complements the forward-thinking sleekness of “Joris Laarman Lab: Design in the Digital Age,” whose 3D-printed and algorithm-designed chairs and tables channel organic forms through the unlikely medium of machined metal. For those interested in avant-garde artistry at a smaller scale, “Jewelry of Ideas: Gifts from the Susan Grant Lewin Collection” exhibits innovation at the level of earrings, necklaces and other chic accessories across the past six decades. With sharp geometry and bold color combos, the jewelry in the collection is sure to leave an impression.

Oaxaca-born artist Rufino Tamayo is the subject of the museum’s “Tamayo: The New York Years,” which will immerse visitors in the oil painter’s surreal interpretation of the American urban landscape in the first half of the 20th century. Though inflected with pre-Columbian Mexican folk influences (Tamayo had blood ties to the Zapotec people), his art is distinctly modern in its geometry, its melancholy and its dreamlike atmosphere. A nuanced blend of European and Mexican traditions, Tamayo’s work will take on a different significance for each individual who views it.

The most delightfully bizarre exhibition coming to D.C. this fall is the Renwick’s “Murder is Her Hobby: Frances Glessner Lee and the Nutshell Studies of Unexplained Death,” leading visitors through a macabre village of dollhouse tableaus recreating elaborate American crime scenes. When Lee assembled the miniatures, she had in mind a practical end: the training of forensic analysts. Indeed, the models are still used in instruction today, some 55 years after Lee’s passing. But what is perhaps most compelling about the diorama displays is their mixture of innocence and whimsy with death and fear of the unknown. For fans of detective stories and eerie Americana, this is must-see material.

Going hand in hand with the work of Frances Glessner Lee is the unsettling Rick Arulace installation “The Final Stop,” which takes the form of an atmospheric, purgatorial subway platform where sound and light are in constant flux but no trains ever actually arrive.

In the wake of Labor Day, “The Sweat of Their Face” reminds us of the diversity, fortitude and resilience of America’s labor force across the years. The exhibition runs the gamut from grainy industrial- and Depression-era photographs of child factory hands to Winslow Homer’s warmly colored visions of labor in the American natural world. As workers’ individual stories are increasingly sidelined in the economy of the modern day, “The Sweat of Their Face” brings to the fore the humanity that has always underlain material production in the U.S.

In addition, The National Portrait Gallery’s classic America’s Presidents show—remodeled to include extra information and exploration-friendly touchscreen monitors—will be triumphantly reopening on September 22, complete with Gilbert Stuart’s Lansdowne portrait of George Washington. And in mid-November, the Portrait Gallery will reveal 27 of its new acquisitions, to breathe fresh life into the nooks and crannies of the American experience.

For a thought-provoking look at how artists and everyday people alike find meaning in a vacuum, check out the Hirshhorn’s “What Absence is Made Of” exhibition. The works within are notable for their inventive use of negative space and intentional omissions, which goes to show that what isn’t present can often be just as affecting as what is. This type of art by its nature demands active participation from viewers, so go prepared for a mental workout.

Also at the Hirshhorn will be “Utopian Projects,” a collection of whimsical maquettes from the minds of conceptual artists Ilya and Emilia Kabakov. The naïve, naked joy of these scenes will provide a fine counterbalance to the enigmatic voids of “What Absence is Made Of.”