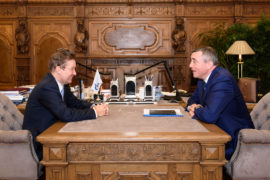 The parties reviewed the implementation of the Cooperation Agreement, noting the strategic nature of interactions between Gazprom and the Government of the Sakhalin Region. As part of the Eastern Gas Program, the Company is developing a major gas production center on the shelf of Sakhalin Island. In 2013–2018, Gazprom and its subsidiaries invested RUB 120.9 billion in local infrastructure, particularly in pre-development operations within the Sakhalin III project. In 2019, capital investment in the region’s infrastructure is expected to total RUB 17.7 billion.

Particular attention at the meeting was paid to gas infrastructure expansion in the Sakhalin Region. It was emphasized that 2018 marked the completion of a new gas pipeline stretching to Bereznyaki and Starorusskoye, the suburbs of Yuzhno-Sakhalinsk. A gas boiler house had been brought into operation in Yuzhno-Sakhalinsk.

In 2019, the Company plans to perform construction and installation works on a gas pipeline branch, the Tymovskoye gas distribution station (GDS), and four gas pipelines running to such population centers as Tymovskoye, Voskresenovka, Voskhod, Zonalnoye, Kirovskoye, Krasnaya Tym, and Yasnoye in the Tymovsky District. This will bring natural gas to more than 3,200 households and apartments and 82 industrial and small-scale power facilities. It is also planned to build a gas pipeline for the residents of the Gorny Vozdukh priority development area.

Gazprom and the Government of the Sakhalin Region are bound by the agreements on cooperation and wider use of natural gas as a vehicle fuel, as well as the Accord on gas infrastructure expansion.

In 2008–2018, Gazprom spent RUB 5.9 billion on gas infrastructure expansion in the Sakhalin Region, building nine inter-settlement gas pipelines. As of January 1, 2019, the regional gas penetration rate was 37.2 per cent.

The Company co-sponsored the construction of an ice palace and the Russia – My History multimedia park in Yuzhno-Sakhalinsk. In addition, a football field was built in the city as part of the Gazprom for Children program.