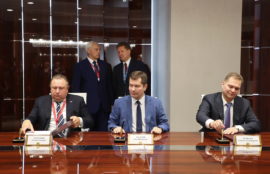 The Memorandum provides for joint efforts in expanding the use of liquefied natural gas (LNG) as a fuel for marine transport in Russia.

The parties intend to cooperate in developing LNG-powered vessels, interacting with potential consumers from among shipping companies, building infrastructure for LNG bunkering, and creating an up-to-date legal and regulatory framework for the use of LNG as a motor fuel.

“We see significant potential in using LNG as a fuel for sea and river vessels thanks to its economic and environmental advantages. The newly-signed Memorandum will allow the parties to consolidate their efforts and expertise in this strategic area,” said Oleg Melekhin.

The production and marketing of natural gas (methane) as a vehicle fuel is one of Gazprom’s priorities. A special-purpose company, Gazprom Gazomotornoye Toplivo, was established for ensuring the continuous development of the NGV market.

United Shipbuilding Corporation is the largest shipbuilding company in Russia. The holding company includes about 40 design offices and specialized research centers, shipyards, ship repair and machine-building businesses, through which USC has consolidated the majority of capacities in the domestic shipbuilding industry.

Gazpromneft Marine Bunker is a subsidiary of Gazprom Neft established in 2007 with the purpose of year-round sales of marine fuels and lubricants for sea and river transport. The company is one of the largest suppliers of petroleum products in the northwestern region.