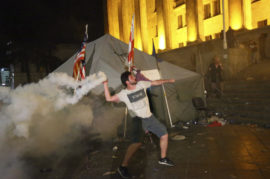 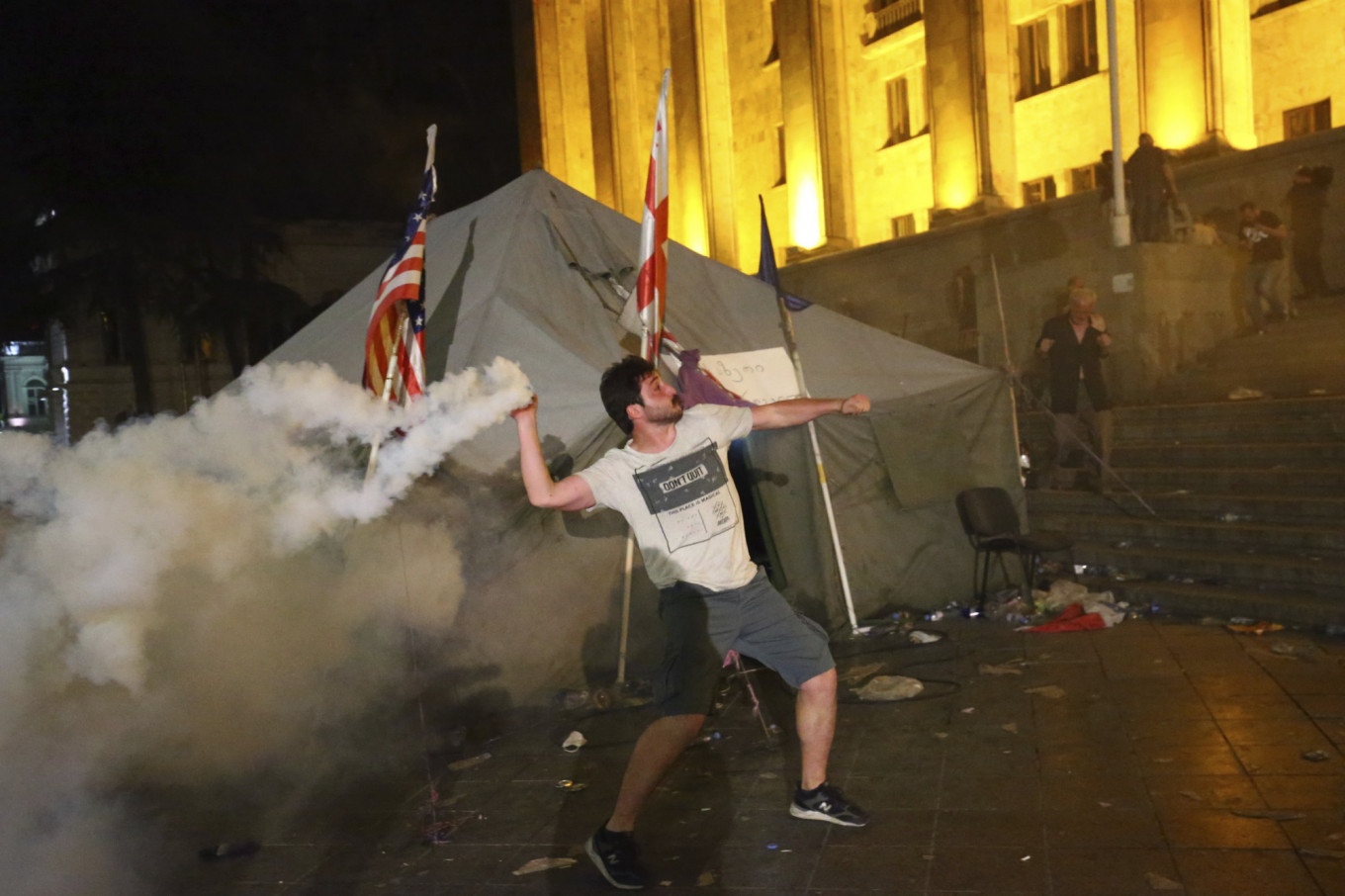 Crowds angry over the visit of a Russian lawmaker tried to storm Georgia’s parliament building on Thursday evening, pushing against lines of riot police, throwing bottles and grabbing riot shields from some officers and tearing off their helmets.

The scenes in Tbilisi, the Georgian capital, flared up suddenly after public anger over the visit and speech of a member of the Russian lower house of parliament triggered big street protests. Riot police used tear gas, rubber bullets and water cannon, prompting most of the protesters to disperse.

After hours of confrontation between protesters and the police dozens had been taken to hospitals with injuries from rubber bullets or stones, thrown by protesters, as well as tear gas poisoning.

A Reuters witness saw about 15 injured people in one of the hospitals.

Georgian Prime Minister Mamuka Bakhtadze said the situation outside the parliament had been “provoked by opposition forces.”

He also said in a statement that the police “never used and is not going to use rubber bullets or gas against peaceful protesters.”

The majority of protesters left the area outside the parliament, but dozens of them remained at adjoining streets, while police continued to use tear gas to disperse them.

Russian influence in Georgia remains a politically sensitive subject. The small country, a U.S. ally, fought and lost a short war against Moscow in 2008.

The two countries have not had diplomatic ties since, and Russia went on to recognize the independence of two breakaway regions, South Ossetia and Abkhazia, where Russian troops are now garrisoned.

Georgia, which is criss-crossed by energy pipelines, hopes to one day join the European Union and NATO. That ambition has angered Moscow, the country’s former Soviet overlord.

Thursday’s protests were sparked by a visit by Sergei Gavrilov, who was leading a Russian delegation taking part in the Interparliamentary Assembly on Orthodoxy (IAO), a body set up by the Greek parliament in 1993 to foster relationships between Christian Orthodox lawmakers.

Gavrilov, president of the IAO’s General Assembly, addressed delegates in his native Russian from the Georgian parliamentary speaker’s seat. That angered some politicians and Georgians who want Russia kept at arm’s length.

The IAO session had to be cut short as a result.

The opposition accuses the ruling Georgian Dream party of being insufficiently firm in confronting Moscow. Many of the protesters gathered outside parliament chanted slogans insulting Russian President Vladimir Putin.

Gavrilov told Russian news agencies water had been thrown at him and unspecified people had tried to remove his identity documents. He was reported to have already left Georgia.

“Georgian Dream has brought the Russian occupiers in and let them sit in the speaker’s chair,” Elene Khoshtaria, an opposition member of parliament, said. “That was a slap in the face to recent Georgian history.”

Opposition MPs demanded that the parliamentary speaker, interior minister and state security service chief all resign over the incident.

Russian Deputy Foreign Minister Grigory Karasin said in a statement that Moscow was outraged by the actions of what he called radical Georgian political forces whom he accused of propagating anti-Russian sentiment.

He said Russia would keep trying to normalize relations with Georgia.

EU Extends Economic Sanctions on Russia Until 2020‘Like Pre-Revolutionary Pogroms’: Ethnic Conflicts on the Rise in Russia