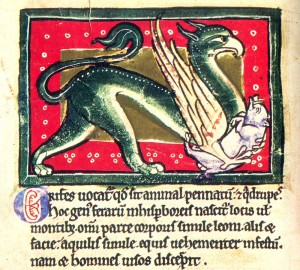 Griffon /gryphus/ 9.6×6.3 cm
The tale of the griffon repeats the story told by Isidor /XII.II.17/ whose version takes rise from Pliny /VII.12: X.49.70/. Of the antique sources Herodotus is known to be the first to mention it /III.116/.
The impressive miniature of the Saint Petersburg bestiary shows the griffon clutching a wild boar. Of the old French bestiaries only Pierre of Beau-vais mentions the griffon /11.226/. He repeats the story by Isidor, Pseudo-Hugh /III.4/ and the bestiaries. Albert the Great /XXIII.1.46/ who places the griffon in the section about birds, believed that the tale was merely an ancient legend, thus doubting the existence of the real griffon. The griffon is the product of ancient oriental imagination which in antique and medieval Europe became part of the general artistic outlook. The griffons appeared in legends and tales. In a popular medieval narration about Alexander the Great they carry his charriot into the heaven. The oriental ornamental and decorative motifs depicting griffons became quite common in the Europe of the Crusades, and the griffon frequented the decoration of capitals and other architectural details of Romanesque churches.