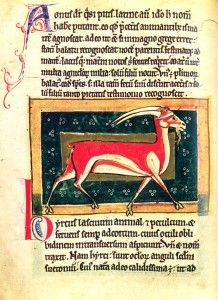 He-goat and Kids /hircus et haedi/ 10X6.5 cm
The text about the he-goat reproduces the text by Isidor /XII.1.13—14/ who says, referring to Suetonius, that the he-goat has narrow eyes. In all probability, the medieval writer mistook “hircani” for “hirci”. The Hyrcani are the Mongoloid inhabitants of Hyrcania described by Suetonius. The story mentions that diamonds can be dissolved in the hot blood of a goat. To this the bestiary adds some facts about kids which Isidor described in a separate chapter /XII.1.13/. Isidor explains the meaning of the word “kid” or “hedi” by the word “edendum” /edible/. Pseudo-Hunh also includes a chapter on the he-goat and kids /III.16/.
In the Middle Ages the he-goat symbolized carnality. The allegoric image of lasciviousness was often presented in the Romanesque and Gothic sculpture as a nude woman straddling a he-goat.