‘It’s Like Nirvana’: Inside the Banya, Russia’s Centuries-Old Winter Refuge 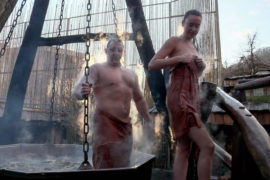 The wind was whipping up snow, which meant that there was no place in the world Alexei Koltsov would rather be than the banya — the Russian bathhouse.

“You come in here from the freezing cold and the heat presses up to you,” Koltsov told me, wrapping his arms around himself as he spoke. “It’s like that feeling yogis talk about — nirvana.”

Every Sunday at 10 in the morning for the past 15 years, Koltsov, 47, has gone to the same banya in central Moscow: Seleznyovskiye Bani. For him, like for many Russians, what was once a space for maintaining good hygiene has turned into a refuge that is part wellness center, part social gathering space and, depending on how one approaches it, part watering hole.

This past Sunday, about 40 men were seated in booths in the Seleznyovskiye hangout area waiting for Koltsov, who sells plumbing equipment in his day job, to conjure up fresh steam. The banya, which has been running since 1851, according to its website, relies on regulars to keep the steam going.

Each takes their own approach. Kolstov started by tossing bucket after bucket of water into an oven filled with iron ingots that banya staff had heated overnight. Then he laid out aromatic twigs of sagebrush; others prefer garlic or horseradish.

Soon, Koltsov deemed it ready for the rest of the men to come into the steam room and seat themselves around the space. “Let’s pray,” he prompted the group. In a different banya I once heard: “We go with God.”

Inside, a man picked up a large paddle-shaped fan to disperse the steam evenly. Then we exited and dunked ourselves in an ice-cold pool, lowering our body temperatures and slowing down our racing hearts.

Usually, Koltsov said, the crew sees a bigger turnout. But this Sunday happened to be Defenders of the Fatherland Day, or Men’s Day, and some of the men had chosen to spend the morning with their families.

“We felt there was no better way to celebrate the occasion than by going to the banya,” Koltsov said of those who had remained steadfast in their routine.

The banya, however, isn’t limited just to men. Russian bathhouses are typically divided into men and women’s sections, so that visitors can strip off comfortably for maximum body exposure to the steam. Lore has it, for instance, that poet Alexander Pushkin’s wife Natalya Goncharova was a regular visitor to Seleznyovskiye.

Gender division dates back to at least the beginning of the Soviet period. After the October Revolution, men and women living on the Kremlin’s grounds were allotted different times for using the banya. But in 1919, women complained to the Council of People’s Commissars about their morning time slot, which didn’t leave them enough time to dry their hair before work and meant they caught colds.

But the banya long preceded the Bolsheviks. According to Viktoria Lipinskaya, a researcher at the Institute of Anthropology and Ethnography at the Russian Academy of Sciences, it first popped up in Novgorod, at the time a collection of Slavic tribes in the country’s northwest, in the 11th century, before spreading east to Siberia.

“The Novgorodtsy were looking for ways to stay warm, just like the Finns who came up with their own sauna,” said Lipinskaya.

But unlike the Finnish sauna, which produces dry heat, the Russian version is humid.

“This helps the steam get deep into the body’s cellular structure,” Lipinskaya explained, adding that the body is stressed during this process, so it’s not a good idea to mix banya sessions with alcohol, as “our men like to do.”

“These were meant to be hygienic places,” she said. “Women gave birth in banyas.”

Misusing the banya can indeed be dangerous. One current Moscow-based foreign correspondent recently recalled how, at a banya in the Russian capital one winter afternoon several years ago, a man suffered a heart attack in the hangout area. Paramedics pronounced him dead at the scene.

But to the correspondent’s surprise, as the attendees waited for police to arrive, they covered his body with a sheet and continued steaming.

“Banyas are like a legal drug,” explained Eduard Dudin, who along with his wife runs Zdrava, a health center in central Moscow that includes three steam rooms. “Your body starts to need it.”

The main reason, Dudin said, is that the banya “is a sacred space that unites all four elements — fire, air, water and soil.”

“And when they all come together you get the fifth element: the soul — or the steam.”

Dudin, who began going to the banya as a child in a Siberian village, now runs an annual competition for banshchiki — steam makers — in Crimea and is working with the Labor Ministry to get the profession recognized officially.

He also welcomes into his center multiple times a week a group of banya devotees that first brought the Russian banya practice to Burning Man, the nine-day alternative gathering in the Nevada desert, in 2016. In Russia, the group is trying to bring the banya into the modern era.

“When people go to banya they take off their social masks,” Oleg Tolstoy, a 37-year-old group member, told me. “You take off your clothes; you place your trust in others. This is a place that is great for your psychological health too, where you can have deep conversations.”

Last Monday, I visited the center with Tolstoy’s group. One banshchik led us in what I took to be the more modern approach. She had a dozen of us, both men and women, get undressed, hold hands and hum together as she maneuvered the steam. At first I felt like laughing; then, as Tolstoy had predicted, my social mask slid off and I relaxed into the steam.

Later, another banshchik, Alexander Antipin, led me through a personal session, taking a more traditional approach. Having grown up in the republic of Udmurtia some 1,300 kilometers east of Moscow, Antipin, 50, became addicted to the banya in his 20s. He traveled around the region taking on apprenticeships with elderly experts. Once, he sought out a famed babushka in the nearby Sverdlovsk region, and spent six weeks with her, studying her craft.

I lay on my stomach with a crown of pine branches over my head, while Antipin whisked steam onto my body with the traditional venik, or fan, made of oak leaves. I lost track of time. At some point he lifted the crown off my head and gave me his hand, leading me wobbling, toddler-like, to an ice-cold pool.

I recalled the words of Steven Lee Myers, a former Moscow correspondent who had become an acolyte of Seleznyovskiye in the early 2000s.

“It has become my church,” he wrote. “My weekly ritual in search of brotherhood and revival.”