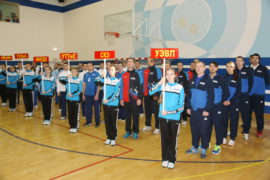 The first competitions in the new Spartakiada Games season (preliminary volleyball matches) began on Friday and continued over the weekend. The matches were played between 17 pairs of rival teams. The winning team will be determined in the final games, which will be held on February 8–10.

Gazprom Dobycha Nadym is a wholly-owned subsidiary of Gazprom. The company’s key activities are production and treatment of gas and gas condensate.

Gazprom Dobycha Nadym was the first gas production company in the north of Western Siberia. It was created to develop and operate the Medvezhye oil, gas and condensate field. It is now also involved in production at the Yubileynoye, Yamsoveyskoye, and Bovanenkovskoye fields. The company holds the license for the development of the Kharasaveyskoye gas and condensate field, where pre-development is still in progress.

Area of activity: Nadymsky, Purovsky, and Yamalsky Districts of the Yamal-Nenets Autonomous Area. Gazprom Dobycha Nadym is the key job provider in the town of Nadym and the Pangody settlement. The company’s team comprises over 10,000 employees.

Gazprom Dobycha Nadym has 13 operating gas facilities and 15 specialized branches. The annual gas production of the company is over 100 billion cubic meters.

The company has adopted an environmental management system in accordance with the ISO 14001:2015 standard.