Culture | Next Week, a Powerful, Three-Story Video Installation Will Transform the Hirshhorn
RssMail

Next Week, a Powerful, Three-Story Video Installation Will Transform the Hirshhorn 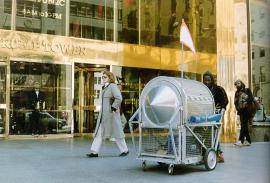 For three nights beginning Feb. 13, the exterior of the Smithsonian Hirshhorn Museum will once again be transformed into art. The museum has announced a restaging of the outdoor projection by renowned Polish artist Kryzstof Wodiczko. Three stories tall and created for the Hirshhorn’s unique circular shape, the fittingly-titled work, “Hirshhorn Museum, Washington, D.C.,” comes back to the museum for the first time in 30 years.

The projection corresponds with the opening of the exhibit, “Brand New: Art and Commodity in the 1980s,” which explores artists who “blurred the lines between art, entertainment and commerce” and appropriated consumer culture to comment on larger social and political issues. In this artwork, Wodiczko, who often focuses on how social structures manipulate the lives of citizens, refers to the increasing power of the media to disseminate ideology. The projection’s images, borrowed from films, advertisements and other forms of media, include a gun, a candle and a grouping of four microphones. Together, they allude to topics that dominated the headlines in the late 1980s, specifically abortion laws and the death penalty.  When compared, the symbols highlight the contradiction between life and death found in the arguments around these topics.

Cited often in art history textbooks and classes, “Hirshhorn Museum, Washington, D.C.” is a seminal piece of artwork. “Of all his public art projections, this is certainly the most striking, the most iconic, because of the location on the Mall, but also the imagery, the gun, the candle, the microphones and the way they tie into the building” said Stéphane Aquin, Chief Curator of the Hirshhorn. These instantly recognizable images are pervasive symbols in the American psyche, and their placement on the building creates an arresting composition.

“It’s like letting us see Guernica by Picasso for the first time after 30 years,” he said. “It’s the re-unveiling of a great work in art history.”

From 6:30-9:00 p.m., Feb. 13-15, visitors will be able to view the projection and browse the new exhibit during special extended hours. The museum will also hold evening talks, including a conversation on Feb. 13 with Wodiczko and the feminist art group Guerilla Girls, whose work is also featured in the show.

Like this projection, many of Wodiczko’s works use public, often historical buildings and monuments as canvases, superimposing arresting images, such as chains, money or body parts, on the structures’ facades to challenge viewers to confront social issues.

Highlighting marginalized communities is a central theme across all of the artist’s international works. He believes in not only giving voices to those affected by traumas such as war, poverty and sickness, but also ensuring there are empathic listeners. Along with his attention-grabbing projections, which often sought to shift public focus to issues affecting vulnerable communities, Wodiczko is also known for public art devices created for the homeless. Especially acclaimed were his multipurpose carts outfitted with storage, wash basins and sheltered sleeping space. One of these, “Homeless Vehicle No. 5” will be featured in “Brand New” and further ties the artist’s projection to the rest of the exhibit.

While the political and social climate has changed since the time of the first staging of Wodiczko’s “Hirshhorn Museum, Washington, D.C.,” Aquin notes the work’s lasting, metaphoric power. “The symbols transcend historical context,” he said. “They are permanent symbols of our culture, but they say different things depending on context. They have a permanent, iconic quality to them.”