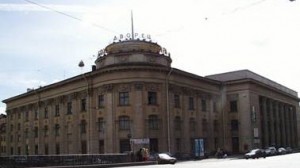 In 1930 a House of Culture for trade-and public catering workers was built on the site of the former Litovsky market. The large-scale reconstruction of the building was carried out in 1956— 1957 according to the plan submitted by the architects N. A. Miturich, V. V. Gorbachev and M. L. Fainberg. The outside of the building is now architecturally more impressive, and the replanning of the interior makes it possible o vise more advantageously the frail with 1,200 seats, the cinema and he lecture theatre, the dancing-hall and the numerous rooms for amateur art activities.
Prominent theatrical companies of Saint Petersburg and other towns, performers from abroad, as well as the People’s Musical Comedy Theatre, which was initiated by the working people themselves, appear on the stage of the Palace. At the close of 1961, 80 amateur actors and actresses gave the first performance of E. Rodigin’s musical comedy The Wide Open Spaces. The University of Culture, Science and Engineering, one of the first mass organizations among the 300 amateur institutions existing in Saint Petersburg, is attended by 2,000 people.
A People’s Conservatoire was established on the eve of the inauguration of the 22nd Party Congress. The Saint Petersburg State Conservatoire named after N. A. Rfmsky-Korsakov and the active members of the Palace organized a competition, as a result of which 70 persons were chosen to enter the Vocal, Piano, Orchestral and Choir conductor Departments of the People’s Conservatoire. 125 teachers from the State Conservatoire and other professional musicians come here to teach the students voluntarily am’ without pay. After graduating from the People’s Conservatoire the students will become skilled performers and directors of amateur societies.
Among other organizations at the Palace worthy of mention are a club for botanists and one for people interested in aquariums, and a Bureau of lecturers on atheism in the Volkhov region which is under its patronage.