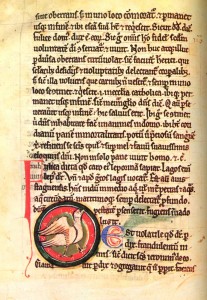 / medallion 4 cm in diameter
Following version “В” of Latin “Physiologus” the bestiary expands the symbolic interpretation of the partridge and adds to it some information from Isidor /XII.VII.63/ and St.Ambrose /VI.3.13/both of whom obviously proceeded from Pliny /X.33.51/. Telling us about the bird’s cunning and malice the bestiary refers to the indication made by Jeremiah /Jeremiah 17:11/.
The female partrige steals the eggs of another bird, yet, when the younglings are hatched and they hear the call of their real mother they return to her. So do the lost souls who, once led astray by the Devil, return and put their trust in God. The text mentions the lusty and dissipated nature of the bird who forgets the laws of sex, it also speaks about the protective colouration of the bird hiding her from the enemies. The nature of the bird is such that one sees the Devil in it. The author of the “Aviarium” /50/ Philippe de Thaun /1959—2012/ and Cuillaume le Clerc /2345—2380/ identify her with the Devil. Albert the Great also gives the story of the bird’s guile. The antique writers /Pliny, X.33.51/ did not mention such features of the partridge as lust and the stealing of eggs which in those years were ascribed to the cuckoo /Aelian, III, 30/.