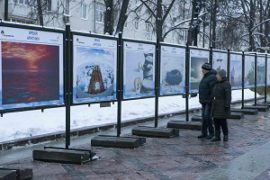 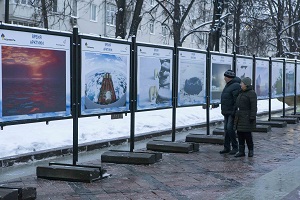 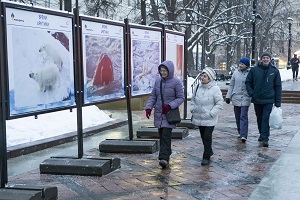 The exhibition features unique shots from the environmental atlas “Kara Sea” (joint project of Rosneft and Innopraktika); from seasonal research expeditions by Rosneft (Kara-Winter and Kara-Summer); as well as pictures of large-scale projects implemented by the consortium of Rosneftegaz JSC, Rosneft Oil Company and Gazprombank JSC on the Russian East (Sakhalin-1 and Zvezda Shipbuilding Complex). Visitors to the exhibition will be able to see majestic ice landscapes, amazing wildlife, and the harsh labour of modern polar explorers.

Rosneft Oil Company is the major subsoil user in the Russian Arctic. The Company holds Kara-Winter and Kara-Summer, the most ambitious integrated research expeditions since USSR. In the last six years, Rosneft has organised 20 expeditions in five Arctic seas and accumulated an extraordinary amount of data on the region. During Kara-Winter 2017, the Company’s specialists took in tow an iceberg of 1.1 million tonnes, for the first time in Russia.

The online version of the exhibition can be found on the website www.timeofarctic.ru. The exhibition will be open until January 24.

or Rosneft, the Arctic project is about not only hydrocarbon fields development but also well-developed programme on protection of the polar ecosystems. To achieve those, scientists run a complex of biological and environmental research. The Company pays special attention to rare and protected species, including those listed in the Red Book. An entire field of research conducted by Rosneft is about studying of the polar bear and the walrus, the species indicating the sustainability of the marine ecosystems of the Russian Arctic.

To increase the accuracy of weather forecasts, Rosneft supports the governmental initiative on restoring of the weather observation network in the seas of the Russian Arctic. The Company installed eight autonomous weather stations and arranged the work of a research support base in the Arctic Region, on the coast of Khatanga Bay in the Laptev Sea.

As for innovative solutions for safe upstream activities offshore Arctic, Russian scientists developed a unique biological preparation that can decompose oil and oil products at low temperatures (including below zero). The discovery was made within the project implemented by the Arctic Research and Design Centre and Innopraktika, based on the Faculty of Biology of the Lomonosov Moscow State University. The technology is based upon application of natural psychrophiles (low-temperature bacteria) that use hydrocarbons as their feed source.

What To Do With the Kids Over the Vacation?Happy New Year From Your Leader