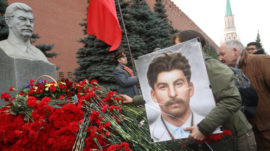 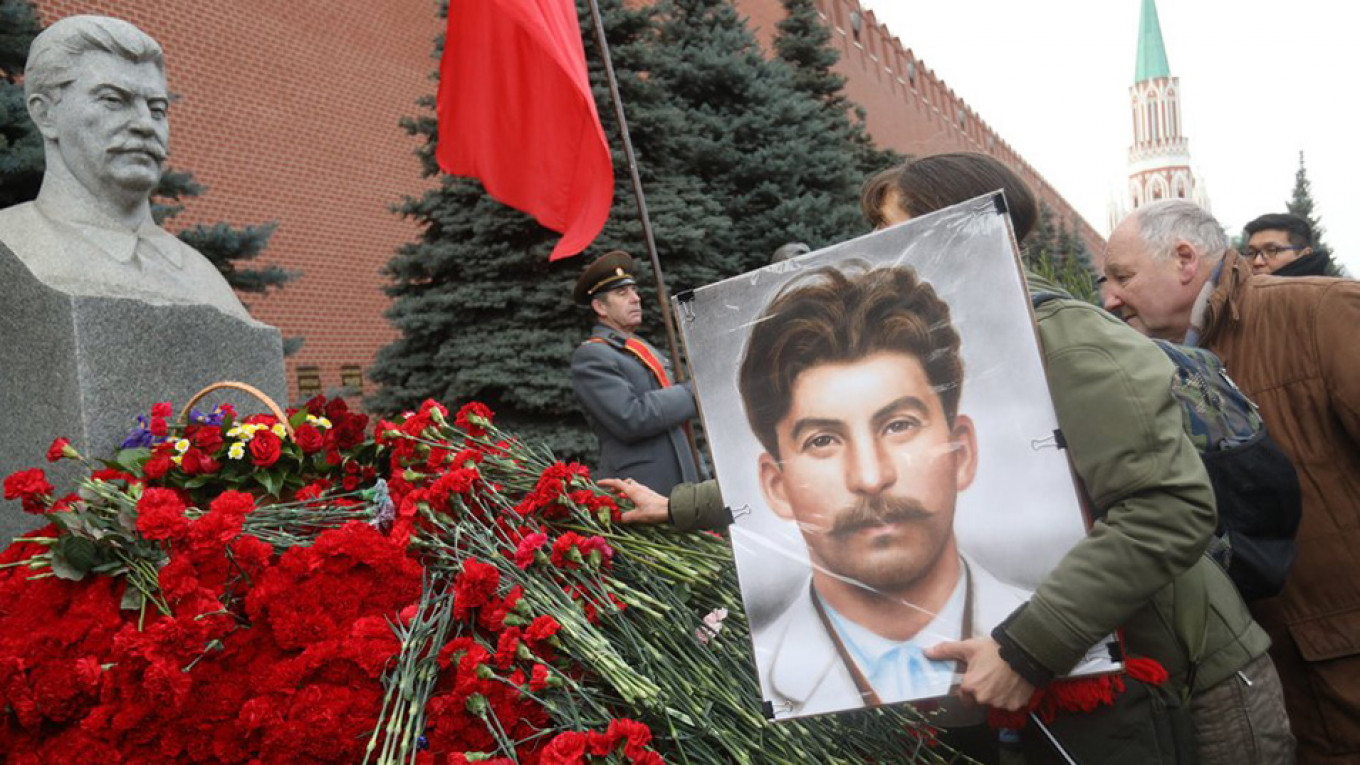 As Russia prepares to mark the 75th anniversary of the World War II victory, President Vladimir Putin is stepping up his defense of Josef Stalin and digging in against calls to open up secret archives on the Soviet state’s killing of millions of its own citizens.

People in places such as Butovo where more than 20,000 victims lie in a mass grave in a former Czarist-era estate about 32 kilometers outside Moscow. Some were gassed to death in the back of trucks that transported them in their underwear to the killing grounds during Stalin’s “Great Terror” of 1937-38.

“We need to know the truth,” said Kirill Kaleda, a Russian Orthodox priest whose grandfather was among those killed and who’s part of a campaign for full disclosure of the fate of victims of Stalin’s repression. “We shouldn’t try to cover it up.”

With the Kremlin inviting world leaders to major commemorations in May of the victory in what Russians call the Great Patriotic War, Putin is cranking up his rhetoric against western powers over the 1939 Molotov-Ribbentrop pact between Stalin and Hitler. In September, Russia denounced a European Parliament resolution that equated Nazi Germany with the Soviet Union and said the pact’s secret deal to carve up Poland and the Baltic States “paved the way” for war.

The president’s prickliness over Stalin’s historical legacy reflects his view of the Soviet role in WWII, in which 27 million of its people died, including a brother he never knew during the Nazi siege of Leningrad, now St. Petersburg.

He’s made the war victory the center of ideological efforts to rally Russians behind his vision of a powerful nation that’s unapologetic about its past and able to stand up to the West after the Soviet superpower’s humiliating collapse.

It’s a vision that flies in the face of the mass repressions under Stalin and the history of Soviet occupation of eastern Europe following the war. Preparations for the WWII anniversary are also taking place in parallel with constitutional changes Putin’s pushing through that may allow him to continue ruling Russia after the end of his presidential term in 2024.

Putin has stoked patriotism to retain public support in the confrontation with the U.S. and its allies over his 2014 annexation of Crimea and military intervention in eastern Ukraine, as Russians have endured five years of falling incomes amid international sanctions.

While he has criticized Stalin’s “personality cult” and labeled his methods “unacceptable,” Putin accused the West of exploiting the issue to tarnish the Soviet Union and Russia in a 2017 interview with U.S. filmmaker Oliver Stone, saying the Communist leader had been “excessively demonized.”

His defense of Stalin and the Soviet record threatens to undermine Russian efforts to ease tensions with the West. U.S. President Donald Trump and UK Prime Minister Boris Johnson are considering Putin’s invitation to attend the annual Red Square military parade in Moscow on May 9. French President Emmanuel Macron has said he’ll go.

Putin told leaders of former Soviet republics in December that the Kremlin had to sign the Molotov-Ribbentrop pact to buy time to build up the country’s defenses after Britain and France betrayed Moscow by reaching the 1938 Munich Agreement with Hitler.

“They want to shift the blame for unleashing World War II from the Nazis to the Communists,” Putin said in the address broadcast on state TV.

He has also repeatedly lashed out at Poland, accusing it of “conspiring” with Hitler and calling the Polish ambassador to Nazi Germany “an anti-Semitic pig” during a Dec. 24 meeting with Russian defense chiefs.

While Putin bolstered his arguments by brandishing documents from the Soviet archives, the former KGB colonel has been much less willing to allow access to the details of repressions by Stalin’s secret police, the NKVD.

At a December meeting of his human rights council, Putin responded skeptically to a call to create a public database of information on the killings under Stalin, saying there were “big risks” in opening up NKVD records.

“We know how the NKVD worked in the Thirties,” the president said. “It may not always be pleasant for relatives to open the cases of their ancestors.”

Putin all-but closed off access to KGB archives in 2006 after a decade and a half of relative openness following the 1991 collapse of Communism.

He visited Butovo in 2007. The 20,762 buried victims — which included 1,000 Orthodox priests, the leader of the Soviet Jewish community, a theatrical troupe from the Baltics and prominent Russians — were identified thanks to a liberal-minded intelligence chief in Moscow in the early 1990s and testimony from a senior former KGB officer.

Putin was “clearly nervous,” said Kaleda, who accompanied the Russian leader and now runs the site where a granite memorial engraved with names and execution dates was inaugurated in 2017. “For him this wasn’t an easy visit — he said the cream of the nation had been wiped out.”

Documents on display at Butovo include the description of prisoners dying from carbon monoxide gas released into trucks, from a witness at the trial of a former security chief involved in the killings. There may be 30,000 buried at the site in all, Kaleda said.

Similar mass graves exist across the former Soviet Union but only a handful have been unearthed. During Stalin’s three-decade rule until his death in 1953, the secret police imprisoned, deported or executed almost 27 million citizens during waves of repression, according to the state-funded GULAG History Museum.

Millions more perished from famine after widespread state confiscation of grain and farmland under Stalin’s policy of forced collectivization.

“Not talking about evil means people forget,” said Elena Zhemkova, executive director of the Memorial human rights organization, which is also campaigning to open the Stalin-era archives. “Imagine if in Germany they refused to discuss the crimes of Nazism,” she said.

Some are turning to the courts. Dmitry Ostryakov, a 35-year-old teacher in St. Petersburg, filed a request this month for the case file of his great grandfather Vasily, a collective farm administrator who died in a Far East labor camp in 1944 about a year after his arrest for alleged treason. The Federal Security Service, Russia’s successor to the KGB, won a 2017 court hearing to deny Dmitry’s father, Valery, access to the documents.

“I consider it my duty to establish the truth” because his ancestor “doesn’t even have a grave,” Dmitry said.