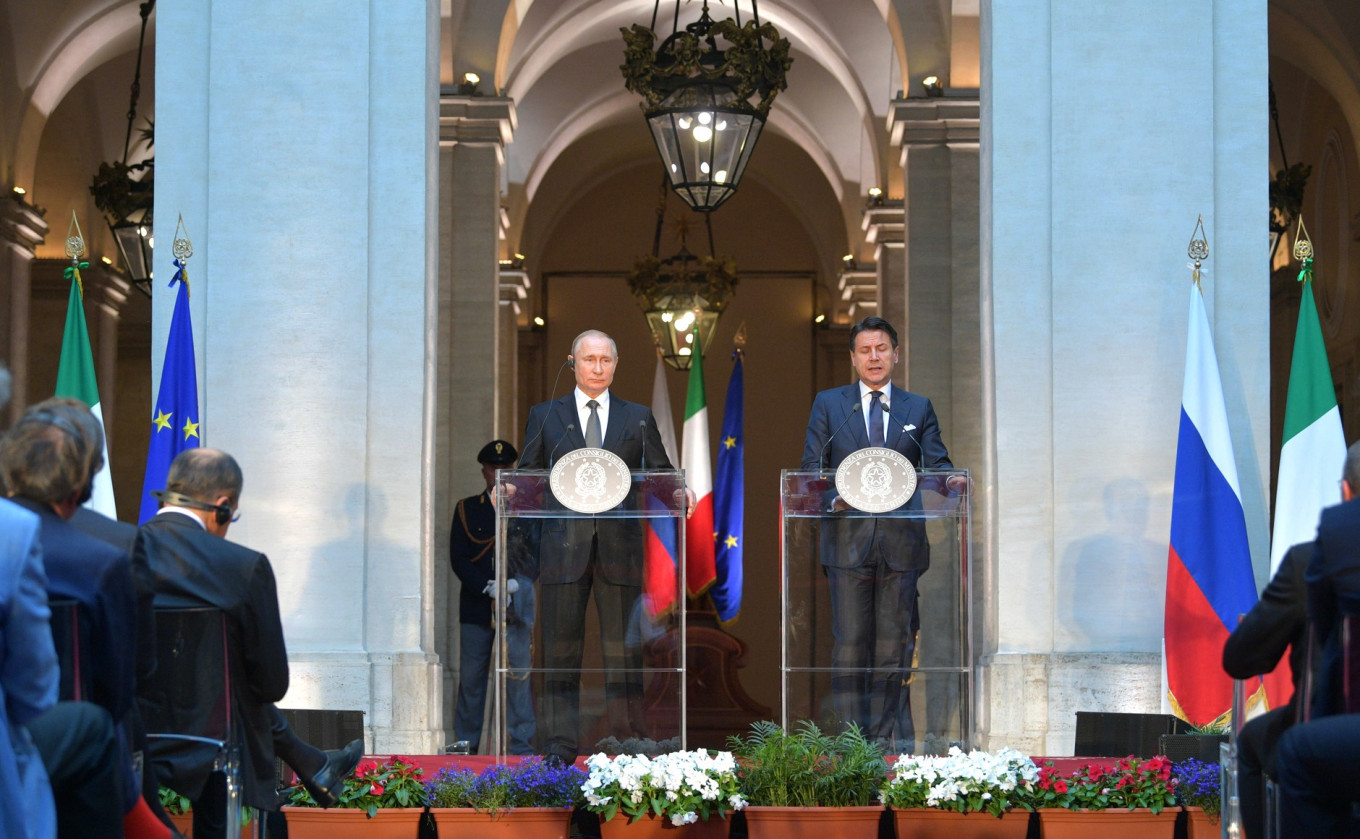 Russian President Vladimir Putin said on Thursday he hoped Italy would battle to restore fully fledged relations between the European Union and Russia and help persuade the bloc’s new leadership that sanctions on Moscow were counter-productive.

Putin, speaking at a news conference after holding talks with Italian Prime Minister Giuseppe Conte in Rome, said Russia had observed Italy’s efforts to improve battered ties between the EU and Moscow, but fully understood that its room for maneuver was limited by various factors.

“We hope that Italy will consistently and clearly speak out about its position (on improving ties) and battle for what was said in public many times, namely for the complete return to normal relations between Russia and Europe as a whole,” he said.

The 28-nation EU slapped economic sanctions on Russia in 2014 following its annexation of Ukraine’s Crimea peninsula and its support for pro-Russian separatists battling Kiev’s forces in eastern Ukraine.

The poisoning of former Russian double agent Sergei Skripal and his daughter in England last year further strained relations. Britain blamed Russia for the incident and persuaded its EU partners to expand sanctions further on Moscow.

Russia denied any involvement in the Skripal affair.

Both the anti-establishment 5-Star Movement and the right-wing League which make up Italy’s ruling coalition have expressed more pro-Russian positions than most EU governments.

Before taking office last year they strongly called for an end to EU sanctions and League leader Matteo Salvini has visited Moscow on several occasions and expressed his admiration for Putin.

Italian media have repeatedly suggested the League, which is now Italy’s most popular party, has received financing from Moscow, something Salvini has always denied.

Putin said on Thursday he saw no insurmountable obstacles to restoring normal ties between Russia and the EU and that he was ready to play his part if no artificial road blocks were thrown in Moscow’s path.

Conte, who is a former academic close to 5-Star, said the sanctions on Russia were not an end in themselves, calling them a temporary measure, and adding that Italy was working to create the conditions for improved ties.

Putin, who earlier on Thursday also met Pope Francis at the Vatican, said the onus was on Ukraine, not Russia, to resolve their dispute, a view Conte gently contested.

“When President Putin, my friend Vladimir, says it doesn’t all depend on Russia, he is too modest. The truth is Russia can play a major role in overcoming this dispute,” he said.

“We need to create the conditions for mutual trust.”