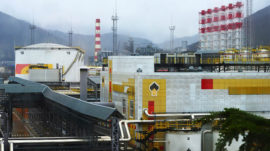 Russian oil giant Rosneft has launched a 43 billion ruble ($610 million) lawsuit against Russian business website RBC over the outlet’s coverage of the company’s disposal of its Venezeulean assets.

The dispute concerns an article RBC published on May 14 detailing the mechanism by which Rosneft, which is majority owned by the Russian government, transferred its Venezuela-based holdings to another state-controlled organization, named Roszarubezhneft.

“RBC has received a statement of claim from Rosneft to the Moscow Arbitration Court, in which the company demands the recovery of 43 billion rubles from RBC as reputational damage,” said an RBC article, published Thursday alongside the corresponding legal documents for Rosneft’s claim.

The oil company, headed by Igor Sechin, a close ally of President Vladimir Putin, claims the way RBC presented the deal “created the impression that … Rosneft’s complete exit from business in Venezuela was imaginary, provoking a wave of disinformation in print and electronic media.”

Rosneft announced it was terminating its involvement with Venezuela at the end of March, shortly after its subsidiaries were slapped with U.S. sanctions for doing business with Caracas.

The PSC in question — RN Okhrana Ryazan — was owned by Rosneft until 30 April 2020, when it was transferred to Roszarubezhneft.

The company assessed the $610 million damages as the difference in share price movements between Rosneft and other energy companies on the day the article was published.

RBC has refuted the claim. Petr Kanayev, head of the paper’s editorial office said in a statement Wednesday: “RBC is convinced of the reliability and objectivity of the published information, based solely on official data. We are ready to defend our position.”

He added: “The first version of the headline is absolutely correct. It was changed not because of inaccuracy, but in order to reflect additional information from the company’s comment on the technical role of the PSC in the transaction, which Rosneft was able to formulate only a day after the editorial board’s request.”

The clash is not the first legal dispute between RBC and Rosneft. In 2016, the oil company sought three billion rubles in compensation over a report about the company’s relationship with BP, which owns 19.75% of Rosneft. RBC was required to remove the article and publish a refutation.