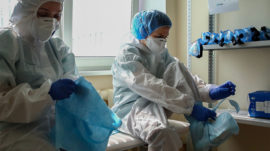 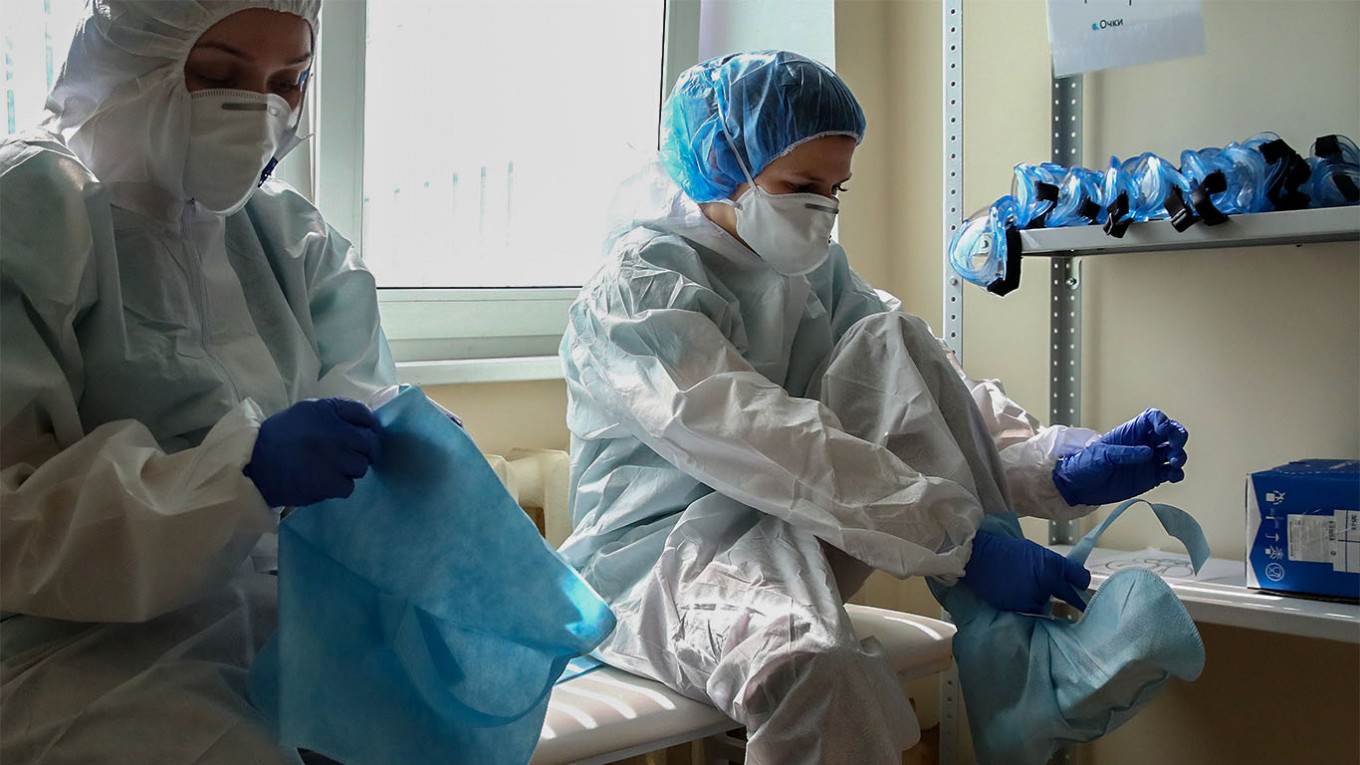 On Wednesday afternoon, Tatiana, a 22-year-old sixth-year medical student at First Moscow State Medical University, received a message from the university’s administration. Starting Friday, the text read, all students in their fourth year or higher would be deployed to coronavirus hospitals around Moscow.

Tatiana, who asked that her last name be withheld, is one of hundreds of medical students already volunteering or working in the Russian capital’s coronavirus hospitals, as The Moscow Times reported earlier this month.

But up until this week, those students had joined the fight against the pandemic of their own accord, even as officials rallied them to take to the frontlines.

Now Russia has moved to draft a broader swath of the country’s medical students. As coronavirus cases topped 100,000 nationwide in a record single-day increase Thursday and President Vladimir Putin earlier this week warned that the country has yet to reach the peak of its outbreak, the deployment shows the strain the coronavirus is putting on Russia’s healthcare system.

Even before the pandemic hit Russia, doctors had complained about a lack of resources. The fight has already taken its toll.

This week, nurses quit en masse from Kommunarka, Moscow’s top coronavirus hospital, over poor working conditions and low wages, while doctors began listing colleagues who have died while treating patients nationwide. They have counted 70 so far.

To help shore up the frontlines, the authorities have turned to the country’s medical schools.

Medical students in Russia start as early as 16, meaning nursing students can begin working in coronavirus hospitals as young as 17 and other students as young as 18. Students study for up to seven years, completing their practical training during summer breaks.

Russia’s medical schools are fulfilling the government order with a heavy hand.

In the message to students seen by The Moscow Times, the First Moscow State Medical University administration explained that refusal will result in unfulfilled academic requirements — which, two students explained, could be used as a basis for withdrawing scholarship money.

First Moscow State Medical University did not immediately respond to a request for comment.

Explainer: How Russia’s Healthcare System Is Tackling the Coronavirus

“You can always refuse to work with [Covid-19 patients], but this automatically equates to refusing to undergo practical training, which carries disciplinary penalties,” the committee’s administrators wrote on the group’s Vkontakte page.

Medical students told The Moscow Times that information on the plan has arrived piecemeal and in a hurry, with many details unclear.

Students first got wind of the plan last Friday, when Moscow Mayor Sergei Sobyanin, who is heading Russia’s coronavirus task force, told the country’s education and health ministries to draw up the order by Monday. He said the plan would affect fourth- and fifth-year students.

“Clearly we will need additional personnel to cover all this work,” Sobyanin said during a task force meeting. “There is no available personnel and pulling from one region to another is pointless.”

“These are motivated guys who already have enough good knowledge and have chosen this profession,” he added. “They will once more in practice see what is real medicine.”

With the rumor mill churning over the weekend, it was only when the joint order was published Monday that students learned the draft would be broader.

As the week went on, they began hearing from their universities.

On Wednesday, Moscow’s Health Department said that student medical workers would earn over 100,000 rubles ($1,369.46) per month and be able to choose from a “variety of jobs.”

One student’s notes of a Wednesday video conference call with First Moscow State Medical University’s vice rector Tatiana Litvinova said students were promised “no less than 100,000 rubles per month.” Three other students at the university confirmed that figure.

Students said they were skeptical of being paid that much. Tatiana, who is working as a nurse at First Moscow State Medical University’s Clinical Hospital no. 3 but still hasn’t seen the terms of her contract, pointed to the Kommunarka nurses quitting this week as a sign of empty words from officials.

“This figure is mostly likely just talk because even professional doctors don’t make this much,” she said. “We are a cheap option.”

On Thursday morning, students in a group chat for fifth- through seventh-year students seen by The Moscow Times said their contracts were for 33,376 rubles ($457.75) per month — a third of the promised amount.

Earlier this month Putin promised 10 billion rubles ($132 million) toward monthly bonuses for healthcare staff. He said that doctors treating coronavirus patients would receive an additional 80,000 rubles ($1,059) per month, while nurses, ambulance medics and drivers would get from 25,000 ($336) to 50,000 rubles ($674).

The Kommunarka nurses who quit this week, however, complained that they had not received the bonuses.

Andrei Konoval, co-chairman of the independent medical labor union Destviye — or Action — said he doesn’t believe Moscow officials would tell students such a bald-faced lie. He said that in the rush of the moment hospitals might not know how to dole out the money earmarked for coronavirus medics.

“In this chaos right now nothing is clear,” he said.

Aside from salary concerns, students who have been working in Moscow’s coronavirus hospitals this month worried that their fellow students are effectively not being given a choice to opt out.

“I understand it is difficult at the moment and hands are needed but those students who don’t want to do it shouldn’t be forced,” said Nikita, a 23-year-old fifth-year student at First Moscow State Medical University, who works at Kommunarka.

“Even the so-called green zones are dangerous and you can easily catch the virus.”

“You can still get sick there — while working for free,” he said. “Many of my friends are very scared.”

Three Possible Scenarios for Life After Coronavirus in Russia

Medical students have been fast-tracked into receiving professional qualifications in many countries as the worst global pandemic in over a century has left few without overstressed healthcare systems.

But while most European countries are only fast-tracking recent graduates, Russia appears to be digging deeper into its medical reserves in an effort to get all hands on deck.

Some Russian students told The Moscow Times they were eager to join the frontlines despite their concerns.

Katerina, a 21-year-old fourth-year student at Russian National Research Medical University, is planning on taking up a role as a nurse at Kommunarka.

She said she is eager to help because she knows from friends working across Moscow’s coronavirus hospitals that “they really are not coping.”

“We knew where we would be going when we signed up for medical school,” she said. “This is now the time to prove whether we really want to save lives.”