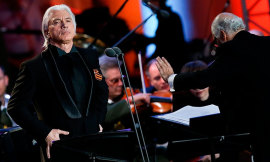 Russian renowned baritone Dmitri Hvorostovsky has postponed recitals in Kaliningrad and Moscow and cancelled a concert in Vienna scheduled for March 7 after being advised to continue treatment for his brain tumor, the singer wrote on his site.

“Dmitri Hvorostovsky is postponing scheduled recitals in Kaliningrad and Minsk over the coming week and canceling his Wiener Staatsoper recital on March 7 after being advised by his doctors to continue treatment for his brain tumor during this period,” says the statement posted on the site.

Hvorostovsky expressed his deep regret that he had to withdraw from the recitals.

“However, right now I must follow doctor’s orders and focus on my recovery,” he added.

The singer plans to return to performing in April when he is expected to sing with Anna Netrebko and Yusif Eyvazov in a concert in Toronto, Canada.

In June 2015, Hvorostovsky canceled all scheduled performances and recitals after he had been diagnosed with brain tumor. The singer’s official website said his voice was unaffected. At the end of September Hvorostovsky made a brilliant appearance as Count di Luna at Metropolitan Opera. Dmitry Hvorostovsky’s debut at the Moscow Bolshoi in Giuseppe Verdi’s Don Carlos, scheduled for December 7 and 10, 2016 was canceled.

Earlier, TASS quoted Metropolitan Opera’s press office as saying Hvorostovsky would be unable to participate in four earlier announced performances in New York due to a course of treatment. Originally, Il Trovatore featuring Hvorostovsky was scheduled for February 3, 6, 9 and 13.