Russian Message in a Bottle Washes Up on Brazilian Beach 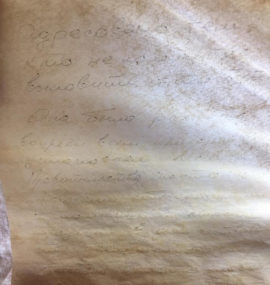 A group of friends frolicking on a beach in Brazil recently discovered a Russian message in a bottle thought to be written by Soviet sailors, Brazilian media have reported.

The 15 friends were vacationing on the country’s southern tip on Sept. 20 when they came across a glass bottle containing a rolled sheet of paper in the sand. A Russian student reportedly helped translate the message after the group posted about it on Facebook, saying that it was written by Soviet sailors near Greenland in honor of their captain’s birthday around 1990.

The message was “dedicated to those who weren’t too lazy to pull this bottle out of the water,” according to an excerpt published by the local GauchaZH newspaper on Sept. 26.

“It’s been drunk despite all government orders and guidelines by the true sailors who remember the sailor traditions and observe them on the day of homage to the honorable sailor, captain of long voyages, Yudin V.A., on his birthday,” the message reads.

Alaskan Finds Russian Message in a Bottle Written 50 Years Ago

Oceanographers told GauchaZH that the message could be a prank, telling the outlet there’s a “very low probability” that the bottle could have ended up in Brazil after crossing 11,000 kilometers and several ocean currents.

However, GauchaZH reported that it was able to find records of a captain Yudin V.A. on the website of Russia’s oceanography research institute.

A Brazilian university’s paper conservation department was due to analyze the message last week to confirm if it was indeed written almost three decades ago, the outlet reported.