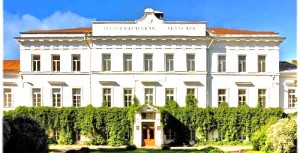 It is the first college of forestry in Russia, founded as early as 1803. At present the Academy is one of the largest in the Russia.
The pride of the Academy is a large park on the slopes of a hill which used to be the shore of an ancient sea. The work of cultivating and enlarging the park has been going on for over a hundred years. The eminent scientist D. N. Kaigorodov, who lived there, contributed much to the improvement of this tree-nursery. He was buried on the territory of the park.
There is also a common grave in the park where the participants in the Great October Socialist Revolution are buried.