SBITENNIK. Second half of the 18th cent. Nizhni-Novgorod Province Copper, patinated reddish-brown. Ht. 32 cm. State Museum of the Ethnography of the Peoples of the Russia 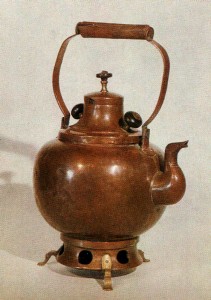 The “sbitennik”, shaped somewhat like a kettle but provided with an internal heat-pipe, was an early form of “self-boiler”, which preceded the samovar. It was used for making and keeping hot the “sbiten”, a most popular Russian drink of mead boiled with sage, St. John’s-wort and spices. This drink was sold by sbiten-vendors right in the streets. The sbitennik continued to form a feature of Russian daily life even after the invention of the samovar proper, for the popularity of the drink did not abate in the 19th century.

March 29, 2013
Tags: Nizhni-Novgorod Province CopperpatinatSBITENNIKSecond half of the 18th centState Museum of the Ethnography of the Peoples of the RUSSIA