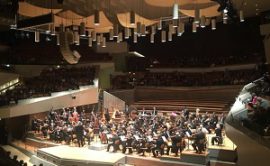 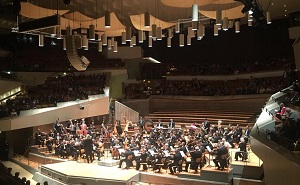 With the support of Rosneft, a concert by the Saint Petersburg Philharmonic Orchestra under the direction of conductor Yuri Temirkanov was held in Berlin. The performance took place as part of the programme of the Grand European tour of the orchestra. During the tour, Yuri Temirkanov and the orchestra performed 11 concerts in the best European halls. The tour took place just before the upcoming anniversary of Yuri Temirkanov. On December 10, 2018, the maestro will celebrate his 80th birthday.

At the concert in Berlin, masterpieces of Russian composers of 19th and 20th centuries were performed: Prokofiev piano concerto No. 2; tone poems from the opera “The Legend of the Invisible City of Kitezh and the Maiden Fevroniya” by Rimsky-Korsakov; and music fragments from the ballet “Swan Lake” by Tchaikovsky.

Rosneft has supported the Saint Petersburg Philharmonia since 2014. Thanks to the Company’s sponsorship, the philharmonia held international festivals “Arts Square” and “Music Collection” with the participation of Russian and foreign performers; organized the philharmonic orchestra tours in the USA and Europe.

In May 2017, Rosneft’s subsidiary Rosneft Deutschland GmbH opened an office in Berlin. Rosneft is the third largest refiner on the German market with a total throughput performance of about 12.5 mtoe per year, which is more than 12% of the overall refining capacity of Germany. The average oil conversion ratio of the Company’s facilities is 93%, and the Nelson average complexity index is 9.1. The operating activities are carried out by the subsidiary Rosneft Deutschland GmbH, which manages petroleum products sales and the supply of raw materials to refineries owned by Rosneft — PCK, MiRO, and Bayernoil.