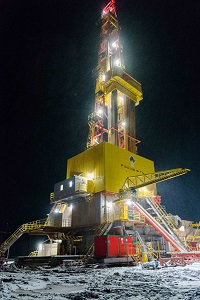 Taas-Yuryakh Neftegazodobycha LLC, a subsidiary of Rosneft Oil Company, has set a new penetration record in Fishbone downhole splitter drilling. The total length of the horizontal wellbore exceeded the previous record by over 800 metres and reached 6,052 metres. This is the most extensive horizontal part of a downhole splitter onshore. The start-up oil rate exceeded 200 tonnes per day.

The Fishbone technology was named after a structural peculiarity of a well resembling a fish skeleton with many side holes radiating from a single main horizontal hole. The main wellbore length amounted to 1,407 metres, while seven of its laterals range from 334 metres to 1,006 metres. During the planning, Taas-Yuryakh Neftegazodobycha specialists simulated the wellbore operation on a geologic and hydrodynamic unit and selected the tools and downhole equipment.

Taas-Yuryakh Neftegazodobycha started to apply the downhole splitter drilling technology at Srednebotuobinskoye field in 2016. Since then, 13 downhole splitters have been drilled, 10 of which are Fishbone. This contributed both to achieving the increased drilling efficiency given the challenging geology of the field and to removing a range of technological limits during the development. In addition, the successful implementation of the drilling programme contributed to an increase in the flow rate thanks to the growth of productivity and external boundary of horizontal holes and costs reduction due to a shortened construction cycle.

The application of innovative technologies is one of the strategic priorities of Rosneft. Following this policy, Taas-Yuryakh Neftegazodobycha builds advanced wells, introduces state-of-the-art technological solutions and modern downhole equipment.

In 2019, the enterprise plans to continue the implementation of a downhole splitter programme, as well as to deepen the search for the most efficient oil production technologies.

Taas-Yuryakh Neftegazodobycha LLC develops ten licence blocks located in the Sakha Republic (Yakutia). The enterprise is developing the Central block and Kurunga licence block of the Srednebotuobinskoye oil and gas condensate field, being one of the largest Rosneft’s assets in East Siberia.

In 2016, Rosneft finished the establishment of an international hub on the basis of Taas-Yuryakh Neftegazodobycha where the Company holds 50.1% of shares while the consortium of Indian companies, including Oil India Limited, Indian Oil Corporation Limited, and Bharat PetroResources Limited, holds 29.9% and multinational corporation BP holds 20%.