Culture | Take Me Out to the Ball Game … in Moscow
RssMail

Take Me Out to the Ball Game … in Moscow 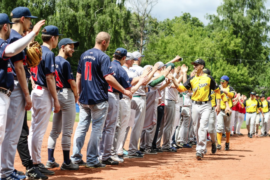 It’s a warm Moscow evening under the floodlights of a baseball stadium. The hitter sends the ball flying off the bat into a cloudless sky. A fielder 80 yards downfield sprints to get under it, glove raised. He’s made it in time, but can he take the catch? No! He fumbled. The hitter makes second base.

This, it turns out, is a typical play in Moscow baseball, where quality varies hugely from team to team. But it doesn’t matter. The 30 or so men (aged between 15 and 45) who gather each weeknight during the summer don’t do it for sporting glory, but simply for the love of a game that is still carving out a niche in Russia. The would-be catcher looks to the heavens in annoyance, but he’ll be back next week for redemption.

Baseball in Russia owes its existence to the International Olympic Committee (IOC), which in 1986 declared it an official Olympic sport. The Soviet government acted quickly to establish a league, and by the summer of 1987 thirty teams were founded. The dissolution of the U.S.S.R. in 1991 was an early blow to the sport: overnight all the teams were divided up among 15 separate states. This fragmented the league system, which had to then rebuild itself in each country. Baseball in some places ceased to exist, but in Russia the sport gradually got back onto its feet.

The high point of Russian national team baseball came only ten years later in 2001, when a second-place finish in the European Baseball Championship would’ve seen them into the Olympics in a qualifying year. Unfortunately, baseball was removed as an Olympic sport in 2005, leading to a period which Bob Protexter – an American who has been a Russian national team coach on and off since 1991 – called baseball “stagnation.” The appetite for a successful Russian team dissipated.

This was reflected in Russia’s results in the European Championships; 8th, 11th, 10th, and 12th place finishes followed the 2001 success, and they haven’t even been able to qualify for the competition since 2012. This July, the team was defeated 5-3 by Israel and they missed another chance to return.

Why then is there an optimism around the Russian game? First and foremost, the sport is back in the Olympic fold. Reinstated by the IOC, baseball will be on show next year in Japan. Unfortunately, Russia will not participate, having failed to qualify, but its return has renewed determination within the sport. While the sport may not make it to Paris in 2024 (given a lack of French interest), it is very likely to be there in 2028 when the location is Los Angeles.

“The goal is now 2028,” says Protexter, who is hoping for a snowball effect. “The goal is always the Olympics, but the by-product is better funding, a better league, better players, and more interest.”

Already there are positive developments, especially in Moscow, where there are new and updated facilities. The RusStar Arena now hosts night games thanks to newly installed floodlights and can seat several hundred people. It has been in non-stop use this summer, hosting national team training, children’s competitions, Russian league games, and amateur league games.

Andrei Lobanov is a 29-year-old, 6’3”, Russian national team pitcher who can send the ball steaming out of his left hand at speeds approaching 90 mph. He has had a successful career in both the Russian league and in U.S. teams. “I was seven years old and I heard about baseball with bats and balls,” he told The Moscow Times. “One of my buddies started playing and asked me, ‘Do you want to try?’ We just had fun, and I still play now… I just love playing baseball.”

Lobanov has certainly noted the improved conditions in recent years: “We can be better, but we’re actually getting better because of [they’ve built] new stadiums like the RusStar… Five years ago we didn’t really have anything like what we have now.”

Lobanov is also looking to the future, having been involved in the coaching of young Russian players for over eight years. “I’m working with kids now, teaching them to play baseball… we went to the [U12] European Championship last year with 10 to 12-year-old kids and we finished 3rd… it’s good for them and good for us.”

The next step may be getting Russians playing in the top league in the world, the Major League Baseball (MLB) in the U.S. There are a few players close to making it, like 21-year-old Anton Kuznetsov, a pitcher who is playing minor league baseball in the U.S. with the Philadelphia Phillies affiliate team. If he or someone else could make the MLB grade in the coming years, it would represent a major step forward for Russian baseball.

Whether Russia can properly compete with the world’s elite teams in the coming years remains to be seen. But for the ever-growing group of enthusiasts who gather together on summery nights under the floodlights, the game is in a healthier position than it has ever been. With a few more ball parks, baseball is in Moscow to stay for a long time to come.