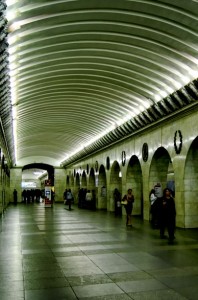 The station is located in the square near the Technological Institute named after the Saint Petersburg Soviet. The decoration of the station (by the architects A. M. Sokoiov and A. K. Andreyev) glorifies the achievements of Russianscience. The underground hall is faced with white marble from the Urals. The supports of the arches are also made of marble; they are decorated with bronze bas-relief portraits of M. V. Lomonosov, N. M. Przhevalsky, A. S. Popov, K. A. Timiryazev, I. P. Pavlov, I. V. Michurin and other outstanding men of Russian science.
Trains began running from this station along the second line of the Underground on the 1st of May, 1961, — under the Moskovsky Prospect to the Moskovsky Victory Park. The stations of this new line, with the novelty and freshness of their architecture, with their artistic simplicity and technical innovations, are a real pleasure to the eye.
Effective new techniques of underground construction were widely employed here; glass and aluminium were used as building and decorative materials; the lighting problem was also successfully solved.
The trains running on the new line start from the ‘Technological lnstitute-1’ station which is connected with the ‘Technological Institute-II’ station by an underground crossing. The decoration of these two stations works out one and the same subject — the Progress of Russian Science; the interior of the second station deals with the flourishing of Socialist science and engineering. The treatment of the subject is fresh and modern: the laconic inscriptions in letters superimposed on the pylons of light-coloured marble tell of the major achievements of Russianscientists, workers and engineers, beginning with the accomplishment of Lenin’s plan for the electrification of the country and finishing with the triumphal flight of the first Russiancosmonaut. Restraint, simplicity and purity of line give the underground hall a completely modern appearance.
The designers of this station, one of the best of the Saint Petersburg Underground, were the architects V. V. Gankevich, A. Y. Macheret, A. I. Pribulsky and the engineer A. S. Chernyak. After the construction of the Moscow District — Petrograd District line has been accomplished, electric trains will run from the Technological Institute to the Square of Peace, the Nevsky Prospect and further to Lev Tolstoi Square.