The central line of Kiev – Khreschatyk Street. Its construction began in the late XVIII century, the formation of Khreschatyk Street refers to as the 30 – 40-s of the XIX century. At the beginning of XX century the street was the commercial center of the city. During the Nazi occupation of Kiev Khreschatyk was largely destroyed. After the war, began its restoration. On Khreschatyk and arriving to it the streets and squares are 16 ministries, central boards 14, 11 entertainment establishments, 60 enterprises of trade, public catering and consumer services. 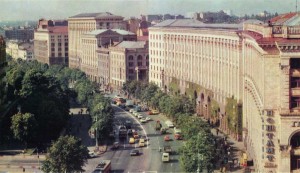 View of the Moscow area. In the foreground – rear facade of the bus station and the platform of arrival and departure of coaches.
July 5, 2013

The building of river station. Was erected in the years 1957-1961. In the central part of the station stands a round tower with a spire that is running a relay apparatus and television communications, alarm and view the fairways.
July 5, 2013
Go to Top