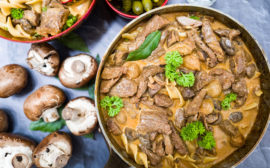 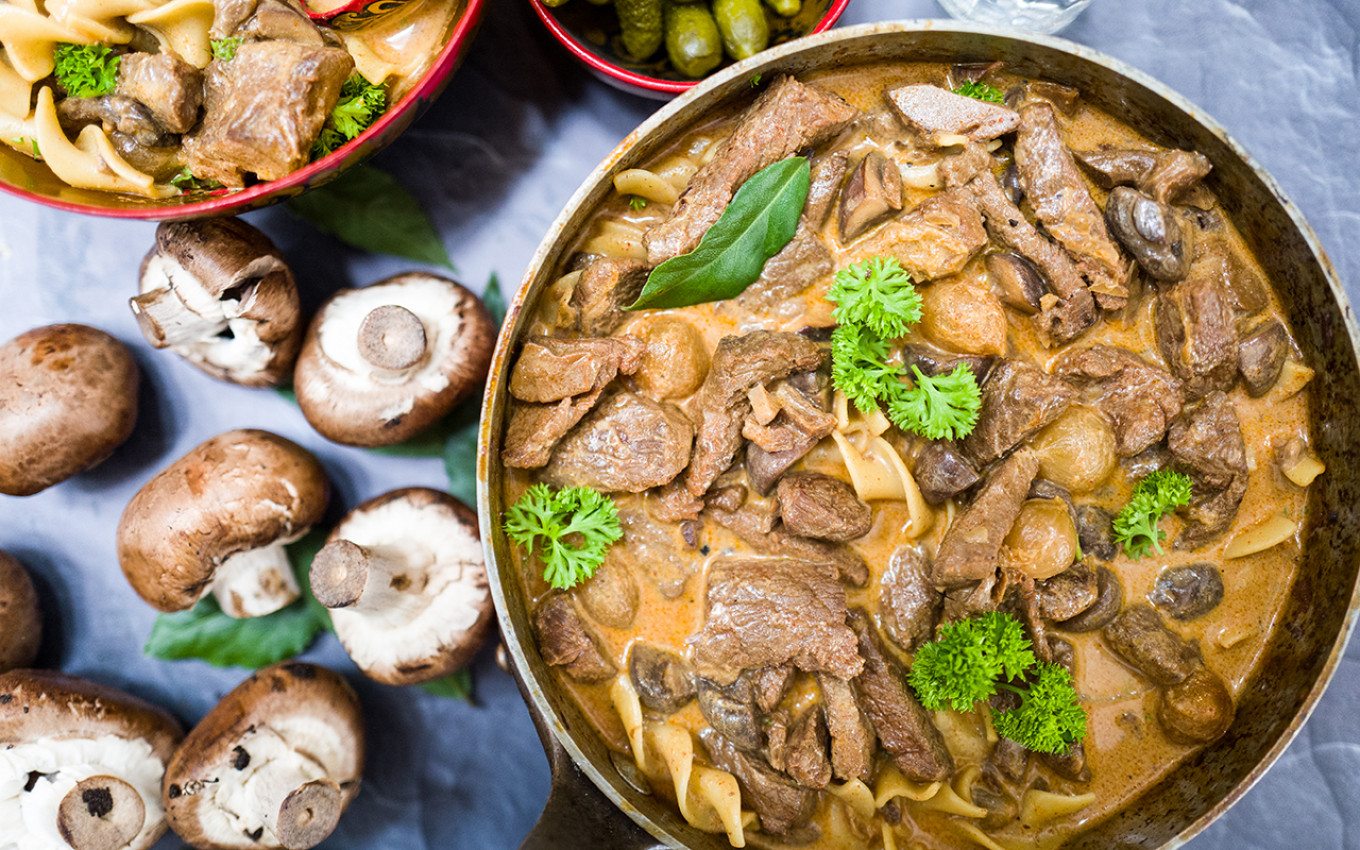 One thing I never worry about is how to entertain out of town guests in Moscow.  After twenty-some years, the template has been honed and refined into a delicate balance of classic rubbernecking (the Kremlin, Red Square, the Tretyakov Gallery, Novodeyvichy Convent and Cemetery) and just enough off-the-beaten-track experiences (Danilovsky Market, Garage, Izmailovo) to make them feel they’ve really gotten under the skin of the Big Potato.  And I never hesitate when making reservations.  I book a table at Café Pushkin and then, in true Russian fashion, I become authoritarian.

“You’ll have the Stroganoff,” I inform my guests, waving the dandy waiters and their enormously heavy menus away.

“Will we?” my guests sometimes timidly respond, but usually they are too footsore and “full of impressions” of Moscow to argue.

And they always do.

The Beef Stroganoff at Café Pushkin is all of the unapologetic excesses of Imperial Russia sautéed into one magnificent, rich, rib-sticking dish.  I think of it as the culinary equivalent to Swan Lake at the Bolshoi or the Imperial Regalia at the Armory Chamber: impressive, satisfying, and solidly and so unequivocally Russian.  And like a fur hat or a matryoshka doll, you really shouldn’t leave Moscow without it.

Beef Stroganoff, like the family it was named for, has covered a great deal of ground.  From the time of Ivan the Terrible, the Stroganoffs had a finely-honed taste for both adventure and the finer things in life.  Pairing these passions, they successfully petitioned the Tsar for the rights to settle the virgin lands beyond the Urals.  Becoming viceroys of Siberia, they controlled unimagined wealth in mineral ore, salt, fur, and timber.  These riches kept them close to the throne even as it passed into the hands of the Romanovs.  As the Romanovs introduced European culture to Russia, the Stroganoffs kept pace with their monarchs; they erected the elegant Stroganoff Palace on the Moika River in the new Imperial Capital of St. Petersburg, and staffed it with a regiment of servants, including the requisite French Chefs, without which no noble Russian household of the 17th Century was complete.

Legends as to how a classic French fricassee de boeuf in cream sauce got its aristocratic name abound. Count Grigory Stroganoff (1770-1857), one story says, had terrible teeth and his French chef shaved cuts of beef into smaller-than-bite-sized morsels and mixed them with a rich cream sauce to help them go down smoothly.

Count Grigory’s son Alexander Stroganoff, one of Tsar Alexander III’s trusted ministers and a celebrated gourmand, employed a French chef Charles Brière who submitted a recipe for “Beef Stroganoff” to the Russian “L’Art Culinaire in 1891,” the year his aristocratic employer died.  Brière may have garnered praise and claimed authorship of the recipe, but it is unlikely he invented it; a recipe for govjadina po-stroganovski s gorchitseju (Beef Stroganoff with mustard) appeared in the authoritative “Gift to Young Housewives” by Elena Molokhovets in 1861.  This version was blander and far more Spartan than the dish we know today, relying only on allspice and a dollop of Sareptskaja mustard to season the beef and sour cream.

Four decades later, Pelagia Alexandrova-Ignatieva added significant layers of both flavor and texture to Beef Stroganoff in her 1912 “Practical Guide of the Basics of Culinary Arts” with the addition of mushrooms, onions, and tomato sauce.  She also inaugurated the custom of serving Beef Stroganoff with potato straws, which has remained the Russian norm.

It took a revolution to spice things up.

In 1917, Beef Stroganoff headed east to China with White Russian emigreés fleeing the Bolsheviks.  There, over several decades it became a regional favorite, its piquancy enhanced by the addition of hotter spices and complementary umami flavors such as fish and soy sauce. The Chinese served Stroganoff over rice, and it was in this iteration that it enjoyed great popularity during World War II with visiting American servicemen.  They brought Beef Stroganoff to the United States in the post-war era, which sadly coincided with the American mania for convenience foods. Although Beef Stroganoff was a popular upscale dinner party staple, it was also “dumbed down” with ingredients such as Campbell’s Cream of Mushroom Soup and Heinz ketchup. Is it any wonder that Esquire’s “Handbook for Hosts” called Beef Stroganoff “A Good He-Man’s Dish?”

To bring all of these legacies together into a version that remains true to Beef Stroganoff’s French origins, Russian ingredients, and Asian embellishments, I have developed a recipe to make at home when my “he-man” craves upscale comfort food.  This recipe aims to strike a balance of a rich, creamy sauce spiked with just enough of Beef Stroganoff’s Asian sojourn to keep interesting.  Mushrooms play a central role, true to the Russian passion for fungi.  Campbell’s and Heinz are firmly banished for more exciting flavors that Brière, Alexandrova-Ignatieva, and yes, even the pioneering Stroganoffs would applaud.

I use two non-traditional methods, which address two potential stumbling blocks to making a successful Stroganoff. To avoid tough and overdone beef, I marinate it first in Asian flavors, which begins the tenderization process that the quickest of sears and a long rest finish.  I also employ Kenji Lopez-Alt’s excellent method of proofing gelatin in the stock before combining it with the sour cream.  This prevents the sour cream from separating or curdling, ensuring a velvety smooth texture.

Since I am American, I cannot let go of the idea that Beef Stroganoff should be served with buttered egg noodles and I make no apology for their inclusion here, though potatoes or rice work equally well as the mandatory side starch.  What is non-negotiable, however, are plenty of salty, briny pickles or cornichons to serve alongside the Beef Stroganoff for the full-on experience!

See?  Told you you’d enjoy it.