On the 4th of August in Szekszárd (Hungary) the first night of the musical “The Lomonosov’s Scroll” staged as part of the International Children’s Creativity Project NucKids-2018 was held in the Mihai Babic Culture Center.

The Culture Center’s hall was full of friends and relatives of Hungarian participants as well as representatives of nuclear facilities of the city of Paks. Antal Kovac, Director of Information of Paks NPP, visited the show. He noted that the main thing in construction of nuclear power plants was the building of friendship between people. The NucKids project shares with us the pure kid’s friendship no construction and productions are possible without which. It is a good thing that such projects exist, he said. 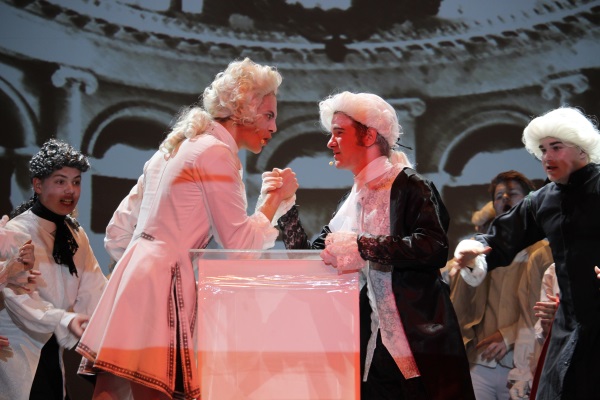 The first night was successful; the Hungarian spectators viewed the spectacular performance which was full of bright musical compositions and remembering dance. Owing to technical capabilities of the Culture Center, the spectators could see all plans of the creativity team. Video projection, light, sound, all these helped the project participants to make the musical picturesque.

“I liked it very much! So much the beautiful music, perfect dance, fabulous dresses! 80 minutes elapsed too quickly! It’s a pity that I am not on the stage but in the hall!” Nikita Ivanov, a representative of the Russian Club in Paks, said.

This year the musical plot is not just filled with detective stories and Arthur Conan Doyle’s enigmas but references to the past. The hero of the musical, art expert Nil Garin, and his assistants tries to solve the enigma of the Lomonosov’s Scroll whose line is also felt in the scenario. While Nil Garin searched for the mysterious scroll in the modern Moscow, the spectators saw a part of life of the prominent Russian scientist.

This year the performance involved 56 participants from Russia and 24 their counterparts from foreign countries: Bangladesh, Belarus, China, Croatia, Egypt, Hungary, India, Turkey and United Kingdom. The musical is headed, before, by producer Vladimir Karabanov and choreographer Maksim Nedolechko. The vocal trainer was Elena Ustimenko and music was written by Ilia Efimov. For the musical The Lomonosov’ Scroll the scenery was made by Andrey Shchaev and costumes – by Yana Vologzhanina.

After the performance, all project participants got surprises from Paks NPP representatives. The kids were greeted with the first night, thanked for staying in Hungary and presented with two large cakes. Also, the plant employees composed a song about the project which they sang to the children at the farewell dinner. This move stroke all the project team.

At this time the NucKids-2018 project participants moved to Ozersk where they picked up their Bangladesh performer, Faraj Said Kaisan. He will participate in subsequent performances. The first night in Ozersk is slated for August 9. Then, NucKids will go to Snezhinsk where they present their musical of August 12. The tour will end on August 15 and 16 by performances in Moscow’s Et Cetera Theater.

Venice Comes to the Pushkin MuseumInside a Moscow Art Studio