These Breathtaking Images are the Cat’s Meow in Nature Photography 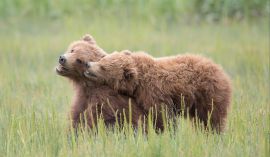 A pride of lionesses lie huddled in the soft sun of morning, their arched bodies and wrinkled faces so intimately intermingled that the cats seem to comprise a single organism, a larger-than-life unit of one mind and one heart. Two pairs of eyes warily regard the camera; three more stare off into the distance, on the watch for movement in the still air. Captured in black and white, the creatures are timeless and otherworldly.

Taken by Sri Lankan photographer Lakshitha Karunarathna on Kenya’s Maasai Mara National Reserve, African Lionesses is the recipient of the grand prize in 2017’s Windland Smith Rice International Awards competition for nature photography. Karunarathna’s striking depiction of huntresses at rest, along with 59 other superior images culled from a submitted 26,000, will be on view at the National Museum of Natural History in Washington, D.C. through September of the coming year.

The breadth of subject matter on offer for museumgoers is astounding. From the frantic dash of a western grebe courtship ritual to a brace of giraffes locked in neck-to-neck combat to a posse of penguins on the march beneath a molten sky to an arc of lightning across the smoke of an erupting volcano, the submissions really do provide what competition director Steve Freligh calls “a vivid tour of nature at its very best.”

Equaling the diversity of subject matter is the diversity of the artists responsible for the photos. Submissions came from 59 distinct countries around the world, and the photos on display are the products of creative minds from Brazil, India, Mexico, China, England, Spain, South Africa, Virginia, California and numerous other far-flung locales. Women and men are both well-represented, as are older and younger artists. New Jersey-born Ashleigh Scully, responsible for a candid shot of two ursine siblings wrestling in a wide meadow, is only 15 years of age—her work earned her the Youth Photographer of the Year title.

The collection of crisp, kaleidoscopically colored photos—some of them life-size, all of them captured in eye-popping high resolution—promises a dazzling escape for visitors to the museum. “These dedicated photographers brave the elements to create images that transport us into nature,” Freligh says, “and inspire a sense of wonder.”