These Collegiate Innovators Are at the Vanguard of Technology and Art 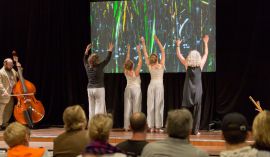 You sit on a pew in the crowded nave of Durham, North Carolina’s White Rock Baptist Church. It is 1960, and Martin Luther King, Jr. stands at the lectern. Opening his speech with a quote of Victor Hugo’s—“There is nothing in the world more powerful than an idea whose time has come”—the reverend proceeds to assemble a compelling and emotionally charged argument for sustained student activism in the weeks and years ahead. King’s words echo through the chamber of the church; around you, fellow audience members periodically voice their support for his message. It is an intense, unforgettable experience. And all of it is virtual reality. In fact, neither video nor audio of King’s remarks survived the sixties—everything you see and hear in 2017 was engineered from the ground up by visionary researchers.

The Virtual Martin Luther King (VMLK) project, devised by a North Carolina State University research team, was one of dozens of cutting-edge creative endeavors showcased at this past weekend’s ACCelerate festival, held at the National Museum of American History in Washington, D.C. All 15 schools of the Atlantic Coast Conference—known for football and basketball but eager to highlight their equally impressive academic achievements—were represented across the three days of the event.

The imaginative spirit of VMLK—which used a voice actor, meticulous modeling of a now-destroyed church, and clever acoustic effects to simulate the experience of hearing live a speech lost to history—was just as present in the other work on display, which ran the gamut from the pragmatic to the artistic, the analytical to the experimental.

A wheelchair developed at the University of Pittsburgh offers advanced articulation and suspension to its riders, who can navigate uneven terrain and overcome obstacles (including stairs) with amazing ease. The chair bends to allow its rider to stand when desired, and a strictly air-powered variant is suitable for use in water at the beach. Professor Rory A. Cooper, the man behind the technology and a steadfast advocate for the Paralyzed Veterans of America, noted that the test group was especially excited to get back the ability to bounce and sway to music—in a word, to dance.

University of Miami, for its part, showed off a child-friendly echolocation simulator called Echo Earth. Young museumgoers donned virtual reality headgear and swam across the ocean depths, their first-person perspective was that of a beluga whale in search of scrumptious octopi and fish. A button on their handsets allowed them to send a piercing ping through the water—if a second ping came back, they knew they were on the right track.

A pair of agricultural researchers from Syracuse described the process of grafting tree branches together to produce a designer tree capable of yielding almonds, plums, cherries and more all on its own. A leafy sample specimen, though technically a “dwarf tree,” loomed large in the third-floor hallway. The most ambitious custom-grafted trees made to date at the university, the students told me, would sell for $75,000 a pop, and each is capable of yielding 40 separate varieties of stone fruit over the course of a year—all without any sort of micron-scale genetic engineering. And while intriguing from a pragmatic vantage, the project had its roots in an artistic vision: that of 40 distinct floral blossoms gracing a single tree.

Jeffrey Brodie, deputy director of the Lemelson Center for the Study of Invention and Innovation at the American History Museum, is delighted at how the event turned out. “You could just see the joy in the faces of the visitors as they engaged with the projects and the people,” he says. “And you could see the joy of the project teams—students, faculty, researchers—as they had a chance to talk about their work with the visitors.” As he circulated through the museum, Brodie couldn’t help but pick up on a number of exciting spontaneous conversations. “There was a lot of inspiration taking place,” he says.

In addition to the plethora of research-themed university booths, ACCeleration boasted a wide range of live performances.

Takumi Ogata, a master’s student in Georgia Tech’s music and technology program, produced music on an avant-garde instrument of his own design, called Rib Cage. Playable with either a xylophone-style mallet or a cello-style bow—Ogata employed both—the 3D-printed alien contraption is capable of producing sounds like guttural whale bellows, the echoing of water dripping from stalactites, and the clacking of scuttling crab legs. As more notes are struck, the solenoids in the interior of the device begin generating a tune of their own in unpredictable fashion—“You’re co-performing with the instrument itself,” Ogata says of his technological wonder.

In stark contrast to Ogata’s otherworldly music were the winsome, recognizable melodies of the University of Miami’s Frost School of Music jazz band, who gave a spirited tribute concert to Ella Fitzgerald (born 100 years ago this past April) on Friday evening. Downstage, a line of saxophones gleamed bright. A seated electric guitarist, clad in a suit of cool gray, tapped his feet with the rhythm. A smooth-pedaling pianist manned a bright red Nord keyboard. Further back, the rich cherry wood of a double bass loomed large. Full-voiced vocalists Meghan Fitton and Desiree Bannister belted out the lyrics to the famed Fitzgerald-Ellington collaborations “Imagine My Frustration” and “A Flower is a Lovesome Thing,” among many others. The hour-long set was met with a standing ovation.

Not every performance was strictly musical. Sheila Gallagher and Richard Kearney, humanities professors at Boston College, walked an audience through the fraught history of 1916 Ireland by way of a moving multimedia display involving oral storytelling, a short film, a melancholy string score composed by violinist Dana Lyn, and the real-time arrangement of evocative objects and symbols beneath a steady camera. Calling themselves Twinsome Minds—an allusion to Joyce’s Finnegans Wake—Gallagher and Kearney set out to illuminate the dual role Irish citizens played in the period, as both patriots fighting World War I for Britain abroad and rebels seeking justice and independence at home.

Crucially, Brodie notes, it was not merely the content of the various displays, dialogues and performances that were diverse: so too were the innovators responsible for them. “There were all kinds of people here, of all ages,” he says. “Traditionally held stereotypes of who and what an artist or inventor looks like were broken down this weekend. That really adds to the sense of empowerment, that people feel like, ‘Oh hey, I can be a part of this.’”

He remembers hearing from a Georgia Tech team exhibiting a sleek electric race car the story of a little boy, aged about seven, who revisited their station some ten times during his visit to the museum. Each time he reappeared, he gave the team a fresh suggestion as to how they might improve on the vehicle design going forward. “His ideas were pretty good,” Brodie recalls.

“You see smiles on peoples’ faces,” Brodie tells me, “you see them say ‘Wow!’ They’re clearly engaged and amazed by the technology, and discussing what’s possible. For me, it’s all about those conversations. And that’s what I enjoy most.”

What’s Behind Ksenia Sobchak’s ‘Against All’ Bid for the Presidency?Who’s Paying for Sobchak’s $17M Presidential Campaign?