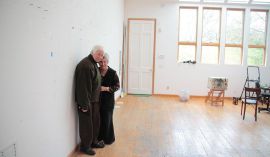 The sails on the tiny art installation The Ship of Tolerance look at first like a colorful patchwork quilt. A closer inspection reveals more than 100 childrens’ drawings sewn together. Each represents variations on the theme of tolerance and were created in response to school discussions on the subject.

The collaborative, ongoing international public art project from Ilya and Emilia Kabakov is emblematic of their optimistic works of utopian dreams—a kind of refugee ship propelled by the winds of vividly-colored childhood dreams.

While the actual ship installations have been 60-feet tall when constructed at nine different international sites—so far, including Egypt, Cuba, Miami and the Vatican—the 2005 piece in the new exhibition “Ilya and Emilia Kabakov: The Utopian Projects,” on view at the Smithsonian’s Hirshhorn Museum and Sculpture Garden, is just 56 inches high.

It is one of 22 models, or maquettes, of the Kabakov’s works that make up the exhibition, which includes a number of others that imagine escape.

This show might be the only way that museumgoers could ever experience a full survey of the works of the acclaimed Russian art duo. Their largescale and celebrated international installations—more than 300—would never fit the floorspace of any museum.

The oldest is a model for the 1985 The Man Who Flew Into Space from his Apartment. But the maquette in the show was newly constructed in 2015. Like the largescale original—which will be featured at a second retrospective opening October 18 at the Tate Modern in London—it allows a viewer to peer inside the door to see the crowded, communal apartment, from which a man has apparently flung himself skyward through the roof with a makeshift slingshot.

Twenty-seven years ago, that full-sized version was installed at the Hirshhorn for the couple’s first U.S. museum retrospective, “Directions: Ilya Kabakov, Ten Characters.”

Since then, the Ukranian-born Kabakovs, working as a couple for more than a quarter century, have lived and worked in Long Island, New York. Both fled the Soviet Union—Emilia in 1973, Ilya in 1987. They married in 1992. “The Kabakovs have been working collaboratively for nearly 30 years, creating installation-based works of unbridled imagination and optimism, a direct response to the hardships, surveillance and suspicion they endured while living in the Soviet Union,” says the museum.

And they have become international sensations.

“They can’t go into a restaurant in Germany or Russia without being stopped for autographs,” says Stéphane Aquin, the museum’s chief curator, who organized the overview after he visited the couple in their studio.

“I was so impressed by these models, I thought there’s something absolutely to be done with these models,” he said.

Ilya Kabakov, now 83, was not at the opening of “The Utopian Projects.” “He no longer travels,” Emilia Kabakov says. So at 71, she was the one who conducted a tour of some of the work on the museum’s circular second level, speaking with a Russian accent softened by some of the years she spent in France and Belgium.

Of the full-size versions of the Ship of Tolerance, some exist, and some were dismantled.

The process is simple. “The drawings are done by children in every country—after they talk about tolerance, about culture, about the importance of people to know each other, to not be afraid of each other.”

Their images reflect what they talked about, even as the children get to know each other. “It’s communication,” she says. “And the best communication even if you don’t know language is music, drawings, culture. You have to be able to tolerate the people from another culture . . . so we start talking.”

Often, while the children are drawing, Kabakov says, the parents who brought them to the event get to talking together as well.

It hasn’t always been smooth sailing. A project in Switzerland was launched during a period of intolerance there. But after a week of working together, Kabakov says, “The city atmosphere changed completely.”

Then there was the time last spring they met with the Pope about the artwork’s placement at the Vatican.

“He said, ‘it’s a very important project,’” Kabakov says. “But on the day when it’s supposed to open, Trump came. It was crazy,” she added, mostly because of all the extra security.

Future iterations of the project are to appear in Oslo, Chicago and Detroit in 2018.

The Ship of Tolerance is not the only vessel docked at the homecoming show in Washington, D.C. The Boat of My Life is a model for a work that would be 52-feet long, 8-feet high and 15-feet across, containing 24 cardboard crates representing different periods of a person’s life, sailing inevitably toward death. Mounted in a dozen different places since 1993, from Salzburg and Grenoble to Durham and Aspen, this model is based on a 2001 version built in Athens, Greece.

Another 2012 work, The Pirate’s Ship seems more like a metaphor for sunken fortunes in the city where it was built—Atlantic City. But that wasn’t the case, Kabakov said. “We went to see the space in Atlantic City. It was the ocean, empty spaces and then these huge buildings.”

Inspired by a granddaughter’s story, it’s intended to look like it’s an old shipwreck exposed by a hurricane, she said. “Little did we know there would be Sandy. The ship was actually installed two days after Sandy. Everything was under water except for one part.”

Since then, a second full-sized Pirate’s Ship has been opened as a playground this year in Redwood City, California.

Maquettes for other works that have been released in multiple places include one for The Fallen Sky. The work looks like a chunk of the sky had crashed, wedged into the ground. It’s based on an accidental inspiration: when a home in Czech Republic was hit by a hurricane, sending a section of a ceiling painted to resemble blue skies and clouds landed in a field in Geneva. In its first iteration, in 1995, it was supposed to represent the shards of the 1991 collapse of the Soviet Union.

Sometimes the fanciful, imaginative ideas by the Kabakovs were just not practical enough to build. Still, with the maquette, we get to see their intent. The Largest Book in the World would have been 21 feet long, giving viewers a kind of Gulliver’s Travels effect.

Neither The Road of Life and its long wooden path upwards, nor Monument to Icarus were realized to the intended scale, but somehow How to Meet an Angel, envisioned as a 3,300-foot high ladder, was realized in three different locations—and at the top rung, one would meet an angel.

Angel wings are also essential to the self-help How Can One Change Oneself? which comes with directions:

1. Make two wings out of tulle and attach leather straps.

2. Put on the wings and sit in silence and solitude for 5-10 minutes.

3. Go about your daily tasks.

Of the four maquettes of projects that were never realized, one was intended for Washington, D.C.—The Large House of Humanity. With outlines of a Victorian home along the Potomac, letters in wire across the ceiling read, “Since home we have but one, this earth we live upon. With our home in constant motion we are striving toward the stars.” It was previously on view at the Kabakov’s first commercial gallery exhibition in Washington, at Hemphill Fine Arts in 2011.

Another piece used wire lettering in a lattice work built in a park. One must look up to see the message: “My Dear One! When you are lying in the grass, grass, with your head thrown back, there is no one around you, and only the sound of the wind can be heard and you look up into the open sky—there, up above, is the blue sky and the clouds floating by—perhaps this is the very best thing that you have ever done or seen in your life.”

Another model, the 1990 Paintings on the Floor, in which famous works from art history were to have been installed on the floor of the Bank of Seattle, predicts a very similar work next door at the Hirshhorn, “Ai Weiwei: Trace,” with its 176 portraits of political prisoners, rendered in Lego, but displayed on the floor.

If there is a dreamy, child-like storytelling quality to most of the works, it is so they can be clearly understandable to all levels. Children can be engaged with the fairytale aspects even as adults can pick up on their commentary about totalitarianism and freedom to travel, create and comment.

“For us, it’s important that there’s many levels in your work. So it’s understandable for a little child; it’s understandable for an art historian,” Kabakov says. “The model, it’s like a child’s toy. For them it’s very interesting. Some are operational. They move. For some adults, they get the poignancy and the irony of the story. Because you’re trying to escape and you can communicate, and it’s a completely different level.”

“Ilya and Emilia Kabakov: The Utopian Projects” continues through March 4, 2018 at the Hirshhorn Museum and Sculpture Garden.