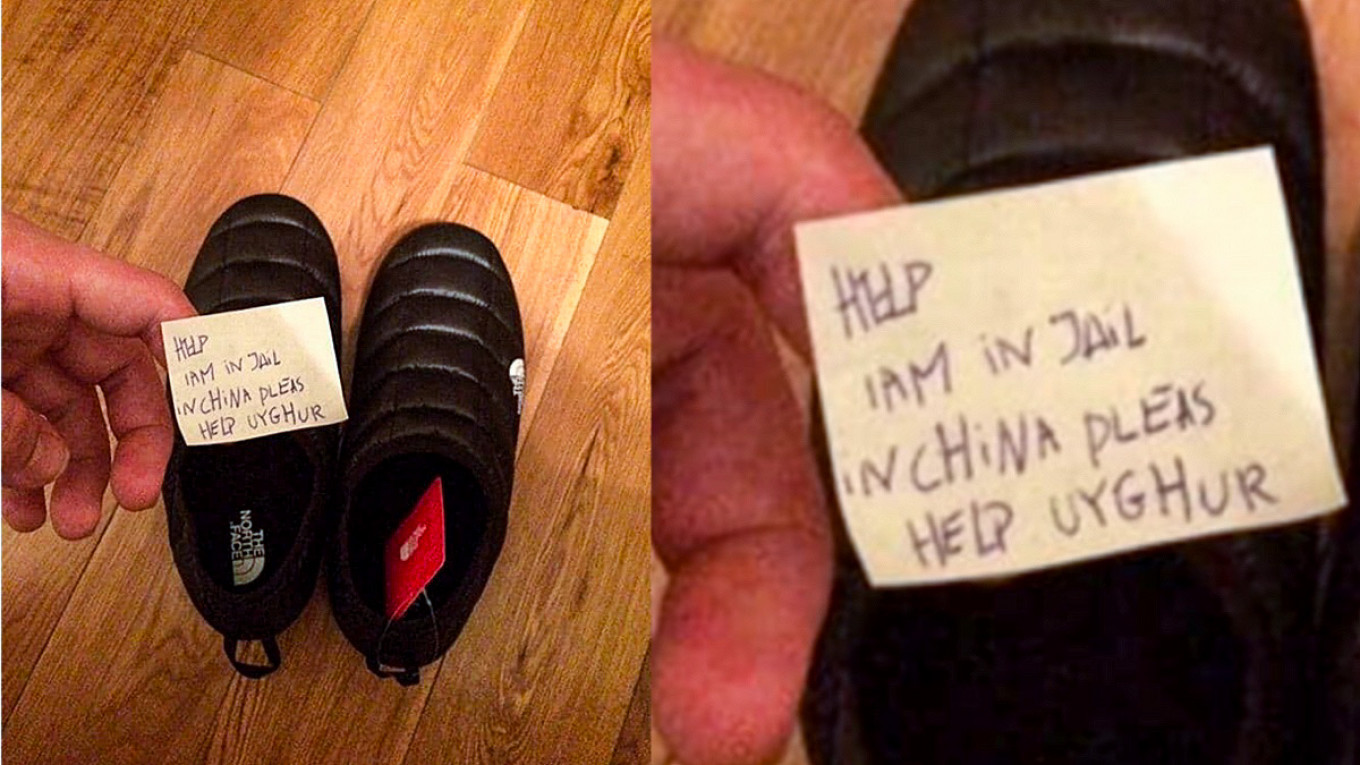 Arslan Gibadullin was eager to try on an expensive pair of The North Face slippers he’d treated himself to in an online shopping spree after collecting them from a pick-up point in St. Petersburg last Thursday.

“I got home and started putting the shoes on. As soon as I shoved my hand in one of them I discovered a strange note tightly sewn inside the shoe,” Gibadulin told The Moscow Times.

The note, which he posted on his Instagram, read “Help I Am in Jail in China Pleas [sic] Help UYGHUR.”

While The Moscow Times has been unable to verify the authenticity of the note, the incident has turned the spotlight for the third time this year on the global fashion industry’s relationship with its Chinese suppliers and their use of forced Uighur labor.

A July 2020 report from a human rights coalition of 180 organizations said that “virtually the entire” fashion industry is complicit in Uighur forced labor in China’s Xinjiang region. And in March 2020, the Australian Strategy Policy Institute issued a report that said over 82 leading brands are profiting from Uighyr forced labor, estimating that China transferred 80,000 Uighurs from their home province of Xinjiang to work in factories across the country between 2017 and 2019.

UN experts and human rights groups say that Chinese authorities have detained at least one million Uighur and other Turkic Muslims in detention camps. China maintains that the camps are voluntary and aimed at tackling religious extremism and poverty. Critics say it is a necessary measure to prevent terrorism. Critics say Beijing is overblowing the threat to justify its actions and liken the centers to concentration camps.

VF, the parent company of The North Face, was initially included on the Australian list, then removed after the brand proved that its association with the factory had ceased before the evidence indicates that the factory received Uighur workers in a transfer scheme.

When contacted by The Moscow Times, VF said it had been made aware of the note and started an internal investigation. VF also said no forced labor was used in the production of the shoes in question.

However, human rights groups specializing in forced labor say it is nearly impossible to be 100% sure that some of the materials used to make the shoe weren’t sourced from China, given the complex nature of the globalized supply chain

“With the discovery of this note, the burden of proof that no forced labor was used during the production of the shoe lies with VF” Johnson Yeung, a Hong Kong representative of the international Clean Clothes Campaign global told The Moscow Times.

He urged The North Face to provide full transparency on the origin of all the raw materials used to produce the shoe.

Penelope Kyritsis of the U.S. Worker Rights Consortium NGO specializing in forced labor echoed Yeung, pointing out that while VF said it “does not source any products from the Xinjiang region,” it didn’t explain where the raw materials came from.

“VF needs to show every facility that was involved in the production of this shoe.”

The SourceMap, an open source online database that visualizes supply chain maps shows that while most The North Face products are manufactured in Vietnam, many of the materials used to make them come from China.

The complexity of the supply chain was underscored at recent government hearing between leading fashion brands and the U.K.’s Business, Energy and Industrial Strategy Committee when a representative of Stella McCartney, a brand which takes pride in its sustainability reputation, said the traceability of certain raw materials, such as cotton, “is extremely difficult to gain.”

During the same hearing, VF’s vice president of global sustainability and responsible sourcing Sean Cady rejected suggestions that VF uses forced labor, but admitted that there have been instances of audit failure among suppliers.

This is not the first time an apparent note from a Chinese forced-labor worker has been found in exported goods. In 2018, Tesco suspended production of charity Christmas cards at a factory in China after a six-year-old girl found a message allegedly written by prisoners in Shanghai claiming they were “forced to work against our will.”

This note, if genuine, would be the first such instance involving the persecuted Uighur minority.

“Given the scale of the suppression we have been expecting such letters to come for a while now,” said Peter Irwin, a senior program officer at the U.S.-based Uighur Human Rights Project NGO.