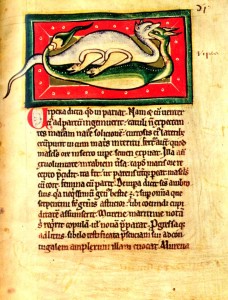 Viper-echidna /vipera/ 10X5.7 cm
Although the story of the viper-echidna is traced back to the tales of the original “Physiologus”, the bestiary mainly follows the description by Isidor /XII.IV. 10—11/, deriving the name from the word “vis” /force, violence/, as the birth of a viper is accompanied by violence /generatio viperarum/ /Matthew, 3:7/. The Greek “echidna” for “viper” is associated with the notion of the viper described by Hesiod /Theogonia, 1, 297/ and further as monstrous Echidna /Herodotus, III, 109; Pliny, X.72.82; Aelian, 1.24/. The story of the viper is full of blood-curdling murders. The she-viper gets pregnant through the mouth but when the he-viper puts his head into her mouth she bites it off, killing him. The she-viper has no womb and her babies are born as they gnaw through her sides, thus killing their mother. The bestiary mentions Ambrose describing the viper-echidna as the most disgusting of all creatures /V.7. 18/ because of her lewdness and desire to copulate with the “malicious and repulsive” murena. The story of the viper provides good material for moralising preaching, enabling the bestiarist to draw a horrifying picture of human relationships and angrily chastise the sin of fornication. The text enlarges on the symbolic interpretation of the “Physiologus” in which the viper is compared with the Pharisees who had killed their father and mother — Christ and the Church.
Pierre of Beauvais wrote two chapters about the viper calling it “wire”/П.134/ in one of them and “woutre” /11.143/ in the other, ascribing to it the qualities which in bestiaries and in the “Physiologus” are referred to the chapter about the serpent /serpens/. In describing the viper and naming Pliny, Jorah and Avicenna among his sources, Albert the Great refutes the story about the viper /XXV.II.61/. The horrible story of the viper is reflected in the miniature showing the most essential moments of that story.