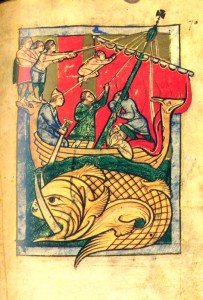 Whale /aspidochelone, cetus, balena/ 10X13.7 cm
The story of a huge sea monster, which sailors once mistook for an islet, was fairly popular in the ancient times and in the Middle Ages. The story originates from Arrian /Indica, XXXI/ and Strabon /Geography, XV, 2.13/. It appears also in many medieval writings about far-away lands and fantastic adventures, among them a poem about the sea travels of St. Brendan and “Roman of Alexander”. “Physiologus” calls the monster “aspido” “tortoise” and Isidor /XII.VII.7—8/ “balena” /whale/ and relates it to the story of Jonah.
Following the text of “Physiologus” the bestiary speaks about the two qualities of the whale. First he mentions his enormous size and sandy colour. Sailors often take it for an islet and land on it. When they begin to make fire the whale, feeling the heat, suddenly plunges into the depths of the sea pulling down the anchored ship and the people. The whale symbolizes the Devil, and the sailors, the people who, ignorant of the wiles of the Devil, become his victims. The whale has a pleasantly smelling breath which attracts small fish into his mouth. “Physiologus” compares the small fish with unbelievers, while bigger fishes are prophets and saints who will never be gobbled up by the whale or the Devil. Pseudo-Hugh /11.36/ and Guillaume le Clerc /2239 —2344/ dress up the story with new details and moralizations. Philippe de Thaiin /1915—1958/ says that the whale himself cunningly covers its back with sand to look like an islet. Brunetto Latini repeats the story of a whale drowning sailors /I.V.CXXXI.133/. Albert the Great /XXIV.1.23/ gives a detailed story of the whale including the description of the whale-fishing, though he does not include the story of the whale’s cunning into it.
In the miniature the painter uses the pattern some what later employed by the painter who executed the pen drawings of the bestiary in the University Library at Cambridge /ms. Ii. 14.26/, though in his miniature the combination of silhouettes is more expressive, the compositional pattern being more vivid and complete.