Culture | Where Has Russia Sent Coronavirus Aid Around the World?
RssMail

Where Has Russia Sent Coronavirus Aid Around the World? 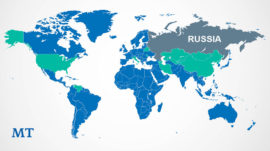 Russia has sent coronavirus test kits, masks and protective gear to coronavirus-hit countries around the world even as it grapples with an outbreak of the pandemic at home, a move that observers say is linked to the Kremlin’s geopolitical ambitions.

The fast-spreading virus has infected over 870,000 people and killed 43,000 across the globe. The U.S., Italy, Spain, China and Germany have been the hardest-hit countries during the global health crisis.

Russia has officially registered 2,777 cases so far with 24 deaths, a number that officials have warned could be much higher as numbers spiked over the past week.

Here’s an overview of the countries that have received coronavirus aid from Russia:

The Antonov-124 is carrying “medical masks and medical equipment on board,” the Defense Ministry’s statement said, without providing further details.

“Russia sent us a very, very large planeload of things. Medical equipment, which was very nice,” Trump said at a press conference Tuesday, before the plane took off.

Italian media later reported that much of the aid was “useless” in the country’s fight against the virus. Russia’s Ambassador to Italy Sergei Razov dismissed the reports as “perverse” and “insidious.”

Russia sent a military plane carrying 23 tons of masks and protective equipment to China in February, when the country was battling the coronavirus at its origin point in the city of Wuhan.

Russia sent 500 coronavirus testing kits which can be used to carry out 50,000 tests to its ally Iran last month. Iran is one of the countries most affected by the outbreak with more than 47,000 cases and 3,000 deaths.

Venezuela said last week that it has received 10,000 test kits from Russia as part of a batch of humanitarian aid.

Mongolia, which neighbors both China and Russia, received a shipment of coronavirus test kits from Russia last month.