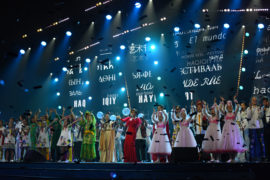 The final round of the 8th corporate Fakel Festival run by Gazprom came to a close in Krasnaya Polyana, Sochi.

Taking part in the Festival were delegations representing 39 subsidiaries of Gazprom from Russia, Belarus, and Kyrgyzstan, together with performers from CNPC (China). The total number of participants exceeded 1,600. The event was attended by foreign colleagues from Gazprom’s partner companies based in Bolivia, France, Germany, Uzbekistan, and Vietnam.

Special awards from Gazprom’s partners were also presented at the event. Sofia Kuzina (Gazprom Transgaz Moscow), a participant in the Young Painter contest, received a prize – a visit to Dresden and the famous art gallery – from Germany’s VNG. Representatives of France’s ENGIE awarded two vocalists, Anna Peresvetova (Gazprom Dobycha Astrakhan) and Gulnara Valeeva (Gazprom Transgaz Ufa), with a trip to Paris including a visit to the Grand Opera.

The special award from Director General of Gazprom Transgaz Krasnodar (organizer of the Festival’s final round) went to the youngest participant, Lev Galanov (Gazprom Transgaz Tchaikovsky), who had recently turned five years old.