Yekaterinburg Protesters Will Hold Out for Proof Church Project Is Canceled 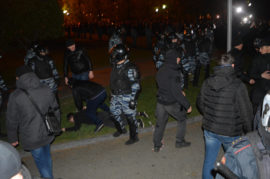 YEKATERINBURG — Thousands of residents of Yekaterinburg in the Ural Mountains who have been protesting the construction of a new church in the city’s central park have vowed to keep up their vigil until they hear an official announcement the project has been canceled.

The Mayor of Yekaterinburg, Alexander Vysokinsky and local governor Yevgeny Kuivashev on Thursday suspended construction and promised to organize a survey on the plans after Russian President Vladimir Putin weighed into the dispute earlier in the day, saying the people’s opinion had to be taken into account.

The events of the last week, which led to clashes between vigilantes and OMON anti-riot police and dozens of detentions and arrests, have led to talk of a new civil society in Russia sparking local activism against big business and the church.

“I remind you that this square was a gift to the city on its 275th anniversary. And now they want to take it away on the eve of the city’s 300th anniversary,” former Mayor of Yekaterinburg Yevgeny Roizman told a 6,000-strong crowd late Thursday evening after the announcement of the suspension.

“The president has taken on the role of the governor, who should have resolved this conflict. But the governor used the square to settle a debt for some services provided to him personally. I have no doubt that the cathedral will be built. But maybe in a different place.”

The crowd greeted Mayor Vysokinsky with shouts of “For shame!” and “Resign!” 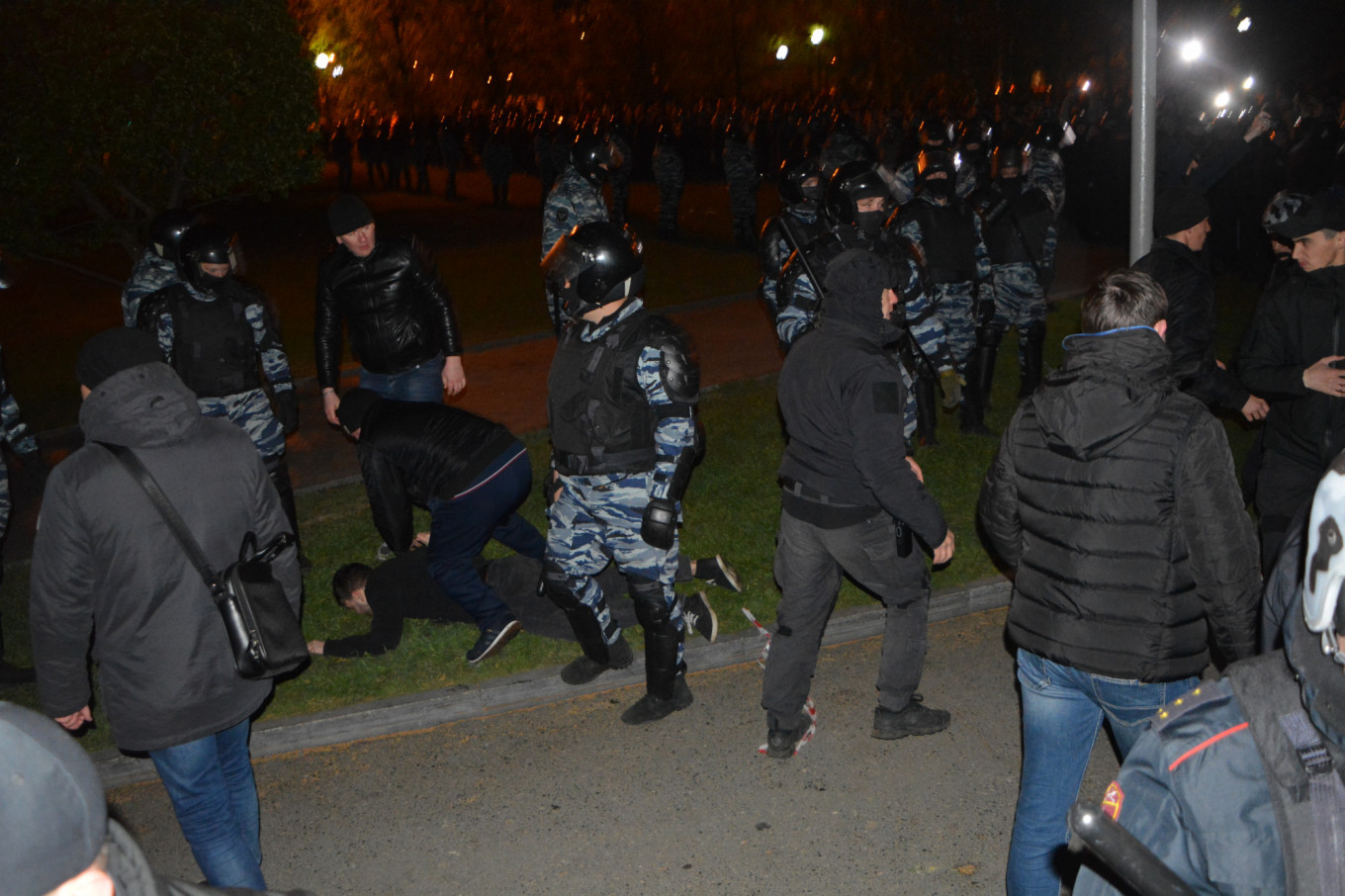 There were dozens of arrests and detentions. Ivan Zhilin

Last year copper oligarchs Andrei Kointsyn and Igor Altushkin, who are in 24th and 25th place on the Forbes list of richest Russians, decided to build the 66-meter-high St. Catherine’s Cathedral right in the middle of the pond in the park.

They cleared it with the governor and mayor, but residents say they weren’t consulted. A poll, which the protesters had never heard about, was conducted on the mayor’s website in February. According to the site, 3,107 people voted for the church, and only 192 people voted against it. The city population is approximately 1.5 million. Protesters believe the poll figures are fraudulent.

Yekaterinburg’s central city square is a favorite place for residents to relax.

“We only heard that there had been a poll when they put up a fence around the square to start construction,” one of the protesters said. “There’s no way we’re going to let anyone chop down all the trees just because some rich guys and bureaucrats want to. They have to take our opinions into account,” said Yekaterina Lavtikova.

Sergei Filippenko, an endocrinologist taking part in the protests, explained that there are very few parks in the city center and a great number of churches.

On the first day of the stand-off, May 13, the sponsors of the church set professional fighters against the protesters. These were men who were trained in the hand-to-hand combat school of the “Russian Copper Company,” which is owned by Altushkin. They beat up the protesters in front of the police, who just watched and did nothing. That infuriated people on social media. About 800 people came the first day, but about 2,000 came the next day. On the third day, there was a new record — about 5,000 protesters.

Every day the protests started off peacefully. People came to the square, sang songs and lit the flashlights on their cell phones. They chanted, “We’re for the square!” and “This is our city!” But every evening when sunset approached the police would try to disperse the crowd.

On Thursday evening, after Putin’s intervention and the departure of Mayor Vysokinsky, people sang and danced in the square, confident that they would be able to keep their tree-lined haven.

One of the protesters called his mother: “Mom! Mom, we won! Mom, I didn’t spend three days on the square for nothing!”

Russia to Award $3M to Greenpeace in SettlementHow to Spend A Night in a St. Petersburg Museum