Yuri Annenkov’s ‘Revolution Behind the Door’ 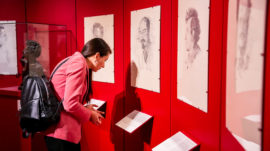 The private Museum of Russian Impressionism opened its 2020 season with yet another blockbuster exhibition entitled “Yuri Annenkov: Revolution Behind the Door.” Yuri Annenkov (1889-1974) is a Russian-born artist, whose career spanned most of the 20th century.

“Revolution Behind the Door” is a truly unique exhibition, since Annenkov’s works are scattered in many collections all around the world and have rarely, if ever, been gathered together for one retrospective.

Anna Dyakonitsyna, the exhibition’s research consultant, said at the press conference that Annenkov “is a master of original, but at the same time controversial, talent.”

“Annenkov is a figure who seems to run through the entire 20th century,” she added.

Annenkov’s youth dates back to the Silver Age: he was strongly influenced by the poetry of Alexander Blok, as well as the theatrical productions of Alexander Benois. After visiting Paris, he moved to a different camp and became a left-wing artist, changing his creative and stylistic preferences. This complexity has given Annenkov a special place in the circle of avant-garde artists. “It is no wonder that during the Annenkov’s lifetime his work left no one indifferent, just as today it causes contradictory reviews,” noted Dyakonitsyna.

Annenkov became well-known in Russia when he illustrated Alexander Blok’s poem “The Twelve.” Blok himself called these illustrations “the graphic version of the original.” Annenkov was also famous for a series of portraits that at first consisted of the leading cultural figures of that time, and then included portraits of politicians.

The series was first presented at an exhibition of the World of Art in 1922 and then transformed into the album “Portraits.” “There were contradictory responses to this album. Some said that the artist was discovering something already known, while others said that he was offering a way out of the dead end of abstract forms toward some kind of synthesis,” Dyakonitsyna said.

The fate of Yuri Annenkov belongs equally to the history and culture of two countries, Russia and France. When he was young, he lived in France for two years and was intimately familiar with the culture of this country.

In 1924 he traveled to organize the Soviet exposition at the Venice Biennale, where his portraits, including the famous portrait of Trotsky, were central. Instead of going back, he got a French visa and went to Paris, where he remained. In France Annenkov recreated himself as a writer and a journalist, and authored well-known memoirs. He also continued to paint and work in the theater, making a name for himself as a French artist in his second homeland.

The exhibition runs until May 24