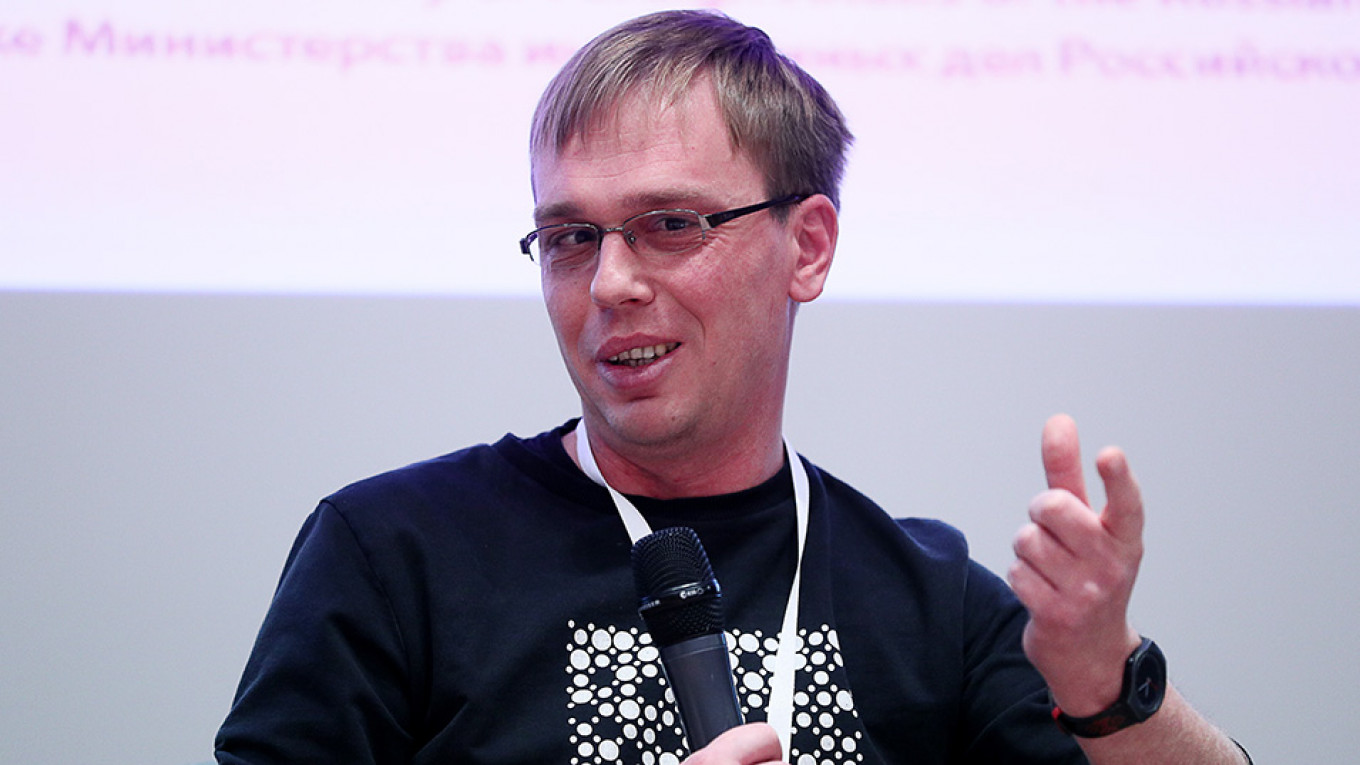 Russian Foreign Minister Sergei Lavrov is unhappy with the West. Countries that consider themselves to be shining beacons of democracy are barring Russian foreign correspondents from working on their territories, he told a crowd of media professionals, lawmakers and diplomats at an upscale hotel in central Moscow Wednesday.

“The West is scared of any competition in the information space,” Lavrov said, referring to the banning of Russia’s state-run outlets RT and Sputnik from a UK media freedom conference in July.

The occasion for Lavrov’s speech was, as it happened, another conference on media freedom. Hosted by Europe’s security body the OSCE, it promised “to discuss openly media freedom and media development issues, safety of journalists, regulations affecting freedom of expression, self-regulation mechanisms and issues related to disinformation.”

“We hope that this will be a step for pushing through some legislative reforms and ensuring more protection for journalists,” Harlem Désir, the OSCE representative on media freedom, told The Moscow Times.

Russia’s Foreign Ministry supported the OSCE in hosting the conference. As if to back up Lavrov’s complaint, it brought together speakers and guests from all facets of the Russian media sphere.

They included representatives from state mouthpieces RT and Sputnik, but also journalists from independent Russian-language media outlets like RTVI and Meduza. One panel even included Ivan Golunov, the investigative journalist who was arrested on fabricated drug charges in June and released after a huge public outcry.

In remarks to the gathered crowd, Golunov lamented the opacity of Russian officialdom.

“If you are a representative of independent media, officials just ignore your questions, and this is a big problem,” he said.

The tone of the conference was clear from the start — through Lavrov’s combative opening speech and one journalist’s response from the floor.

“You talk about what’s going on with RT and Sputnik outside Russia’s borders, but what about what’s happening with newspapers like mine at home?” said Igor Rudnikov, founder and editor-in-chief of the independent Novye Kolesa newspaper in the Baltic enclave of Kaliningrad.

Printing houses have been refusing to print his newspaper and kiosks refusing to sell it since spring 2018, he told Lavrov, all at the behest of Kaliningrad’s governor Anton Alikhanov, who represents the ruling United Russia party.

When Lavrov said he hadn’t heard about his situation, Rudnikov suggested the minister might be focusing his attention in the wrong direction. “What do you want me to do about it?” Lavrov snapped in response.

Unsurprisingly, the day-long conference, at times, grew heated. Neither state-backed players nor independent journalists held their verbal punches during discussions, highlighting the wide gulf of understanding between the two camps.

An editor who resigned from the RBC newspaper in 2016 over self-censorship concerns went head-to-head with Foreign Ministry spokeswoman Maria Zakharova, who has been dubbed Russia’s “troll-in-chief.”

Alexander Malkevich, who has been sanctioned by the U.S. for allegedly spreading divisive political rhetoric there, called out RTVI’s editor-in-chief from the floor for publishing “lies.”

Mostly, the camps talked past each other.

Zakharova was a case in point. She told The Moscow Times that the collapse of the Soviet Union had cost Russia dearly.

“But if we gained something, it was freedom of speech,” she said. “The ability to live without censorship, to live freely and to say and write what we want.”

Meanwhile, Rudnikov said that in recent years, he has survived two attacks on his life and spent months in prison on separate false charges. Most recently, he was released in June after 19 months behind bars, cleared of extorting an Investigative Committee general.

“There are mass attacks on every independent outlet that doesn’t print what the local authorities agree with,” Rudnikov told The Moscow Times. “In Kaliningrad, our website is the only one that actually criticizes the authorities. Fifteen years ago we had at least 10 independent newspapers and radio stations in the region and now we only have state-run outlets. Everyone else has been shut down.”

Some of the journalists attending the conference questioned what the purpose of it was if it wouldn’t be addressing head on the issue of journalists who remain behind bars.

They pointed to Svetlana Prokopyeva — facing up to seven years in prison for an October 2018 column on a suicide bombing outside the Federal Security Service (FSB) headquarters in the northern region of Arkhangelsk.

They also highlighted the case of Abdulmumin Gadzhiyev in the North Caucasus region of Dagestan, who has been accused of “inciting” the funding of terrorism.

“No one listens to our problems,” said Kamalo Ali Akhmedovich, a Dagestani representative of the Russian Union of Journalists. “I tried to organize a round table here on the issue, but I was told we could do it another time.”

Andrei Grishin, who runs the Vesma Today website in the Far East region of Magadan, flew nearly eight hours to reach the conference. He said he was invited by the OSCE because, last month, two strangers beat him, warning him to stop writing stories criticizing the authorities.

“What the organizers should have done from the outset is admitted the obvious: the Russian authorities don’t need independent journalists and they’re not trying to keep any of us safe,” Grishin said. “Then we could have started an actual conversation.”