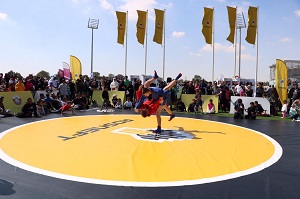 Aspire Zone sports complex in Doha hosted an exhibition performance of Russian sambo athletes during the celebration of National Sports Day in Qatar. Rosneft Oil Company provided for the event as its main sponsor.

The exhibition show, as well as a series of workshops by the seven best Russian sambo athletes, introduced the locals to the unique martial art, which is one of the most popular and favourite sports in Russia.

In between the sport performances, everyone could take self-defence lessons from qualified coaches and take part in various workshops and prize-bearing contests. The visitors were highly engaged in the sambo zone. Also, the event featured a documentary photography exhibition embracing the 80 years of the Russian sambo history.

Rosneft contributes significantly to the development of children’s and popular sports. The Company sponsors construction of ice rinks, sports complexes, and multi-functional sports fields. The Company supports both the amateur and professional sports.

Rosneft has been the main sponsor of the International Federation of Amateur Sambo since 2016. The period of cooperation comprises over a dozen of robust championships on the national and international levels. In the end of 2018, sambo was recognised as an Olympic sport by the International Olympic Committee. The recognition by IOC makes it possible for the martial art to be admitted in the Olympic Games. Sambo is considered a national and top-priority sport in Russia.