Ensembles of New Dwelling Houses at the Harbour of Vasilyevsky Island. 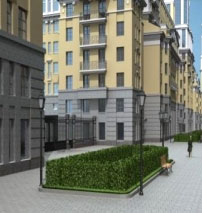 The building of new houses and the planting of trees and bushes in this district have been effected on a large scale since the end of the war. Construction work is particularly intensive in Gavanskaya Street, Nalichnaya Street and Nalichny Pereulok On both sides of the Bolshoi Prospect trees and shrubs have been planted; there is a well-planned park, ‘Vasileostrovets’, near the S. M. Kirov Palace of Culture. A beach has been laid out where the Bolshoi Prospect reaches the Gulf of Finland. The planning of the northwest part of Vasilyevsky Island and Decembrists’ Island and the construction of houses directed by the architects A. I. Naumov and V. V. Popov embody the all-important idea of the overall plan — to give the city access to the sea. According to the project the blocks of new dwelling houses, with all communal and cultural institutions included in each block, will be arranged in micro-blocks, the grouping of the buildings following the modern unconventional layout.
One can seldom come across an old building in the new blocks of houses; however, there is one old house here that inspires veneration in the hearts of the citizens. This house is situated at No. 13, Kanareyechnaya Street. V. I. Lenin visited it sometimes. In the spring of 1694 Vladimir Ilyich participated in the conference of advanced proletarians, organizers of the Marxist circles for the Petersburg workers. The conference took place in this old house (apartment 13), in the room of V. A. Shelgundv, a worker of the Baltic Shipbuilding Yards.