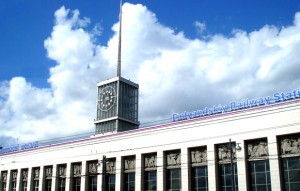 The Finland railway line was opened in 1862 and the old buiIding of the station was erected in 1870. The station and the square in front of it are closelv associated with the remarkable historic and revolutionary event — the unforgettable welcome given by the revolutionary Petrograd to Vladimir Ilyich Lenin who came back to Russia on April 3, 1917 from a forced emigration of many years. It was here, in the square, that Lenin addressed a meeting of many thousands of workers, soldiers and sailors and where his prophetic call for a socialist revolution was heard.
At the terminus, exposed to view, is the historic steam-engine No. 293. On this engine V. I. Lenin, dressed as a stoker, left Petrograd for Finland on the evening of August 9, and later, on October 7, 1917, returned to Petrograd. The engine, one of the most treasured revolutionary relics which for several decades had been in Finland, was presented to the RussianGovernment in 1957. In the years of the Great Patrotic War the terminus was the only active station in the city, besieged as it was by the fascsts. It provided the only means of communicating with the rest of the counin’ through the ‘road of life’ which ran across the ice-bound Lake Ladoga. It was to the Finland Station that the heroic Saint Petersburgers came in triumph to meet the first train from the ‘Mainland’ on February 7, 1943.
A new underground line was put into operation in the summer of 1958. It connected the Finland Station with the Uprising Square, via the intermediate station of Chernyshevskaya. In the summer of 1960 the new building of the railway station was erected by the architects P. A. Asha-stin, N. V. Baranov, Y. N. Lukin and the engineer I. A. Rybin. Desinged and built in the modern style, the structure has successfully completed the historic ensemble of Lenin Square. The part of the old building, which includes the hall where V. I. Lenin made his public speech, is harmoniously merged with the new station which also serves as a vestibule of the Metro. The amount of traffic the station can deal with is colossal — 500 persons per minute. The spacious hall with its white dome-shaped roof and numerous offices, the elegant vestibule and the waiting-hall, as well as the imposing grandiose facade crowned with a tower and a spire, are, undoubtedly, attractive features that make the new station worthy of the admiration of Saint Petersburgers.
The vestibule of the underground station is decorated with a monumental mosaic panel ‘V. I. Lenin — the Leader of the Revolution’. The panel is made of many thousands of pieces of coloured smalt and designed by the artists A. A. Mylnikov and A. L. Korolev.
The Finland Station is the starting point for local trains running to Zelenogorsk, Roshchino, Sestroretsk, Kavgolovo and Tarkhovka. 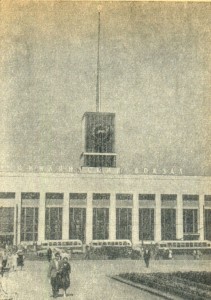 The historic square, where the revolutionary people welcomed V. I. Lenin on April 3, 1917, now looks ma’niiiicent w.th its green trees and boulevards, new houses and the monumental structure of the Finland Railvay Station.