Vladimir Putin’s figure somewhat mythologized. Therefore, looking for interesting facts about Vladimir Putin, you risk finding out that he can turn off a microphone by just a glance; he has hypnosis’s ability, and his toes’ prints if have been superimposed on each other, have the form of National Emblem of the Russian Federation.

These all are nothing but jokes, however this page is informal information and interesting facts about President of Russia, Vladimir Putin.

Vladimir Putin plays different kind of sports; he pulls the novelty and the desire to instill an interest in Russian citizens’ active lifestyle.

Putin is engaged in sambo and judo since he was 11 years old. According to Vladimir Putin, martial arts give special kind of knowledge and skills that can be used in big politic arena as well. He believes that judo is exercise for the body and mind.


It develops strength, reaction, endurance, teaches self-control, to feel the sharpness of the moment, to see the strengths and weaknesses of the opponent, to strive for the best results and constantly work on themselves. Putin also repeated champion of St. Petersburg in sambo and master of sports in this kind of martial arts. He has a black belt in karate. 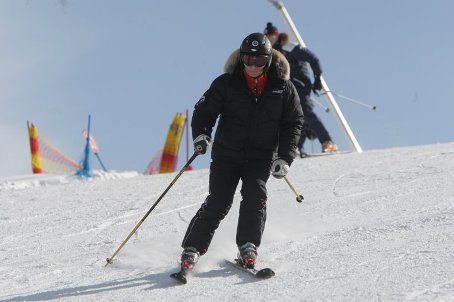 
Vladimir Putin became interested in skiing a long time ago. According to his confession, he skis with great pleasure. Putin prefers domestic, Russian, ski slopes. In 2011 he visited the Olympic venues in Krasnaya Polyana in Sochi and also made a couple of runs on skis. 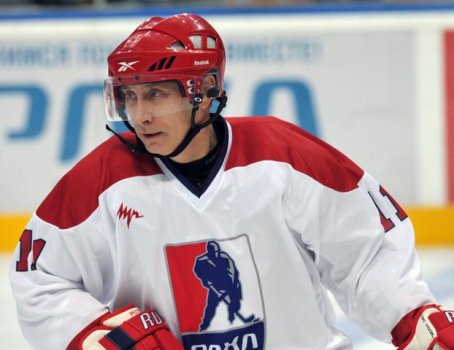 
In February 2011, Vladimir Putin has promised to learn to skate. As the promise was made, he started training. Skate practice was often held after midnight, when Vladimir Putin ended working day. Under the famous hockey player Alexei Kasatonov’s supervision, two months later, Putin was confident skater. In April 15, 2011 he took part in training young hockey players for the final tournament Golden Puck, where he had even scored a few goals.

Vladimir Putin likes to watch animals in their natural habitat and participate in scientific work. He is Chairman of the Board of Trustees of the Russian Geographical Society, and is engaged in the protection of rare animals by controlling the respective programs. The research is being conducted by specialists from the Severtsov Institute of Ecology and Evolution at the Russian Academy of Sciences (RAS) as part of the RAS Permanent Expedition’s work to study animals on the Red List of the Russian Federation and other particularly important species of Russian fauna. Under Vladimir Putin’s personal patronage are following projects: The Amur Tiger Programme; White Whale, Polar Bear and Snow Leopard Programmes. These top carnivores are known to be indicators of the state of the ecosystems in their respective habitats.

Vladimir Putin behind the wheel 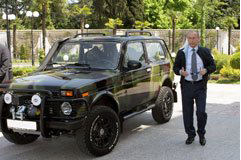 Vladimir Putin had got his first car from his parents, when he was in the third year of university. His mum won a Zaporozhets car in a lottery. Since that time, Putin prefers domestic cars.

In spring of 2009 Vladimir Putin has acquired his Niva SUV. Painted in camouflage colors Putin’s Niva SUV looks quite impressive with its wrought-iron wheels, big road tires, and navigation system, GLONASS. Niva is located in President’s residence in Sochi. According to Putin, Russian SUV Niva is a simple, reliable all-terrain vehicle.

Vladimir Putin has time to deal not only with public affairs, but also the rest. Because it happens very rarely, he tries to spend a short holiday as efficiently as possible. According to him, the rest is just a change of activity. 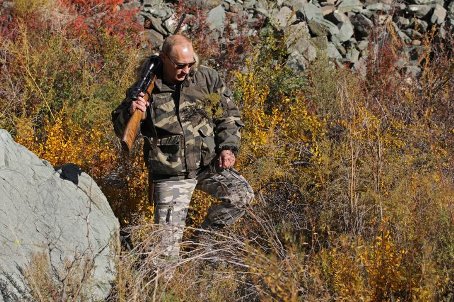 
Fishing is one of the favorite activities of Vladimir Putin. He especially appreciates the fishing in Russia.Also Vladimir Putin has kept steadily in the saddle, so horse riding for him is a chance to rest.

A man like any other – a comic called Super Putin, recently appeared on the Internet site with comics about Putin and his fellow Nanohuman Medvedev.

Vladimir Putin is cast as an enlightened martial arts superhero in this comic trip inaugurated in May of 2011 by a group of Russian artists (with captions offered in Russian, English, German, French, and Polish).

Medvedev is his sidekick, and his powers include transforming himself into a bear (last name Medvedev has root of word medved, which is bear in English), and commanding hi-tech gadgets (his four-legged iPod locates a bomb beneath a bus).

Comics are gaining popularity on the Internet. Although the Putin and Medvedev did not comment on it, and most of the media, according to the authors, refuse to pay attention to it. Comics innocent enough, does not call to any action, nowhere agitate, its main characters cannot be called negative. It is another way around – Super Putin saves humanity, plays sports, as befits the genre of comics he has a loyal assistant – Medvedev. It is unclear whether this is understood as a policy, or as art, who is behind this and why is it done? No matter what, I really enjoyed it and I hope you will too.