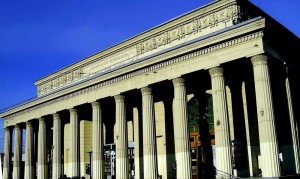 The architecture of the station (designed by A. K. Andreyev) embodies the theme of the industrialization of the country. The name of the station, as well as the decoration of the underground vestibule, is associated with the famous Putllovsky Zavod (now the Kirov Plant) the workers of which have for many generations upheld and enhanced the best qualities of the Russian working class.
The plant, which is more than 150 years old, is entered forever in the annals of the Revolution and the building up of Socialism. The voice of the proletariat of the Putllovsky Zavod was heard on the barricades of all the three Russian revolutions. V. I. Lenin often visited the plant and addressed meetings there. Its workers have given the country not only the first Soviet-made tractors, cranes, turbines, motor-cars, but also its most valuable possession — the priceless golden cadres of Lenin Guard — the captains of Socialist industry, eminent Party workers and Russianofficials, pioneers in the building up of a new life.
And today the collective of the Kirov Plant, that has been decorated with four orders, is again the emblems of military glory on the Moscow Triumphal Arch, which was recently restored on its old site. The oblique pylons, faced with aluminium, harmonize well with the smooth, white vault. The whole composition centres on a sculptural group, showing old Russian armour cast with exquisite workmanship and set up at the end wall of the hall.
The entrance vestibule embodies the interesting and original idea put forward by the architects A. K. Andreyev, A. B. Sokolov and B. B. Kudryavtsev; it is built into the base of a four-storey house and is remarkable for the attractively designed concrete visor above the entrance.